Thursday April 23rd marked the beginning of the trial sessions of two former Syrian intelligence officers: Anwar Raslan and Eyad al-Gharib in the German city of Koblenz. They are being charged with crimes against humanity. This trial is the first of its kind in the world and sets a legal precedent, with Raslan being charged with torturing thousands of people while al-Gharib is charged with rounding-up protesters , according to the Legal Tribune Online.

The legal Tribune confirms that Raslan, 57, and al-Gharib, 43, are former members of the Syrian General Intelligence Service, who were arrested in February 2019 in Berlin and Rhineland-Pfalz. The two are being held pending investigation.

In an interview with Syrian lawyer Anwar al-Bunni titled "The Great Hunt", Der Spiegel provides details of how the two accused were arrested. Al-Bunni said that after arriving with his wife in Berlin in 2014, he saw a man in the area of Marienfelde, a man, he told his wife, he recognized but could not identify. His memory eventually aided him as he remembered that the man was no other than Anwar Raslan, who had arrested him back in 2006 on anti-regime accusations. Now Raslan himself is behind bars. 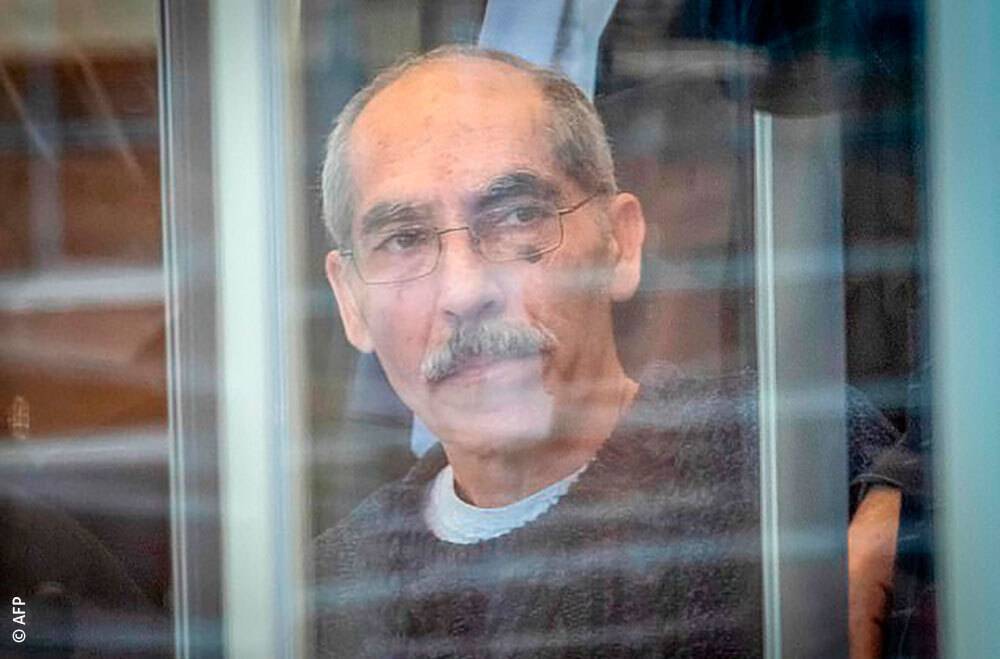 There are dozens of plaintiffs and witnesses in the case, in addition to the research presented by al-Bunni and his staff at the "Syrian Center for Legal Research and Studies". According to the center, the trial sessions are expected to last more than a year, and they will be public.

In a statement published on its website, the Rhineland-Pfalz State Supreme Regional Court, located in the German city of Koblenz, reveals that the first criminal Senate - the State Protection Council - has approved the charges brought by the German prosecutor on October 18, 2019 against Raslan and al-Gharib. The trial proceedings would begin by the court decision made on the 6th of March 2020.

The court indictment reveals that Raslan is accused of committing a crime against humanity between 29 April 2011 and 7 September 2012 through his work, as part of an expansive and systematic onslaught on Syria’s civilian population.

The court indictment states that Raslan is charged with 58 counts of murder, in addition to rape and aggravated sexual assault. As for al-Gharib, he is said to be guilty of aiding and assisting in crimes against humanity, between the beginning of September 2011 and October 31, 2011.

According to the court statement, Raslan was said to have been the head of the Investigations Unit of the General Intelligence Department (Branch 251), responsible for the security of the city of Damascus and its surroundings. Branch 251 prison was attached to this unit. Raslan was also responsible for the investigation unit and was the military chief of the prison staff.

The indictment of Raslan includes "killing and torture under his command and responsibility in Branch 251 prison, in the period from April 29, 2011 to September 7, 2012, where at least 4,000 prisoners were tortured by Branch 251, including exposure to brutal violence like beating , kicking, and electric shocks. This is in addition to a case of rape and aggravated sexual assault. The detainees were also threatened with maltreatment of their relatives. "

The court indictment states that Raslan is charged with 58 counts of murder, in addition to rape and aggravated sexual assault. As for al-Gharib, he is accused of aiding in crimes against humanity

These brutal physical and psychological violations were taking place with the aim of extracting information and confessions from prisoners about the Syrian opposition. According to the German court statement, at least 58 people were killed as a result of maltreatment during this period.

Additionally, inhuman and degrading conditions of detention prevailed in the prison. Among them, for example, denial of access to medical care, personal hygiene and food, and severe overcrowding in cells.

In his capacity as head of the investigation unit, Raslan organized the investigators and prison guards and defined their duties and procedures for their work, including the use of brutal and systematic torture. He was also well aware of torture throughout his tenure.Thus, he was aware of the fact that prisoners died as a result of extreme violence. 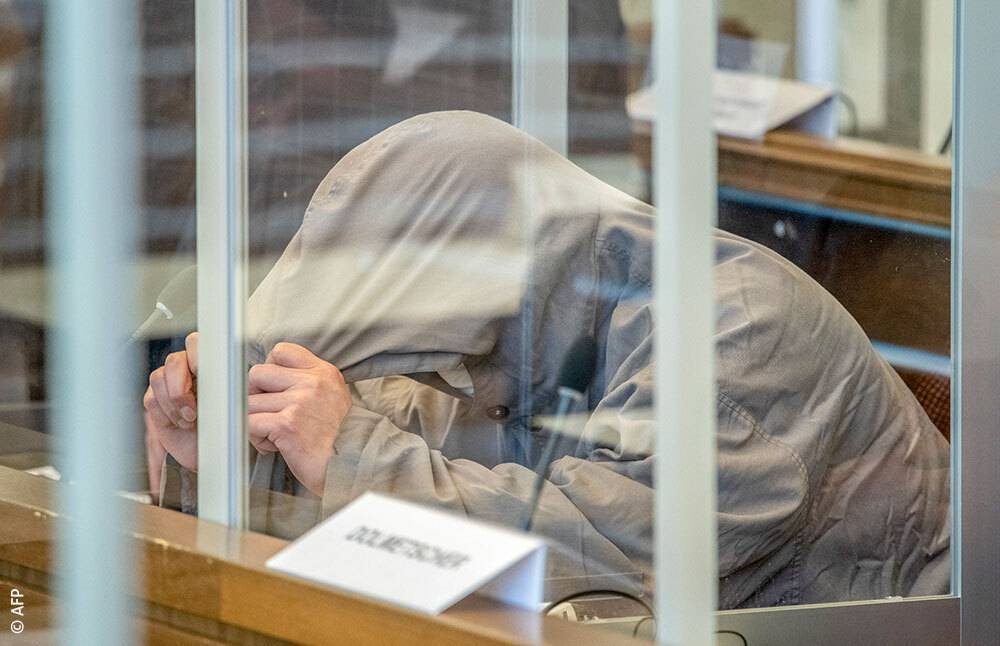 As for al-Gharib, he was an employee in a subdivision, and in the fall of 2011, he and his colleagues searched the streets to round-up demonstrators who fled as a result of the violent dismantling of the demonstrations and transported them to the Branch 251 prison. As a result, at least 30 people who were transferred to 251 prison were arrested, beaten on the way to prison, and upon their arrival subjected to brutal and systematic torture. Al-Gharib was also aware of the brutal and systematic torture in Branch 251 when the protesters were arrested, all according to the statement of the court which is trying the defendant today.

The European Center for Constitutional and Human Rights (ECCHR) supports 16 Syrian torture survivors in this trial, some of whom have filed collective plaintiffs.

The director of the center, Wolfgang Kaleck, says that this trial will give a general overview of the crimes committed by the Syrian regime. This knowledge may be used by others in subsequent trials.

He explains that the investigation of crimes committed by members of the regime of President Bashar al-Assad is not possible in the foreseeable future, and therefore the only possibility is to prosecute them in third countries such as Germany, enacting the principle of universal jurisdiction.

The trial that started today is part of an effort that the center has begun since 2016 in its work on Syria and includes a series of criminal cases by more than 100 Syrian people who are torture survivors, relatives of victims, activists and lawyers from Germany, Austria, Sweden and Norway. 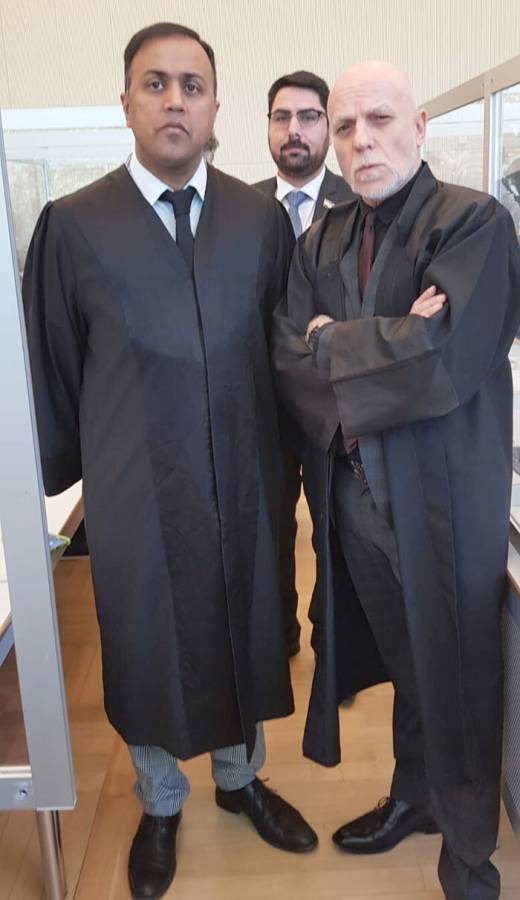 The trial comes amid an ongoing debate about how to prosecute Raslan and al-Gharib in Germany, for crimes they committed while working for the General Intelligence Service in Syria, before announcing their defection from the regime and their exit from Syria.

German Lawyer Khubaib-Ali Mohammed explained to Raseef22 that the two accused will be tried for the crimes they committed while serving the regime in Syria, even if they defected from the regime and left Syria later. The lawyer emphatically affirms that Raslan and al-Gharib will be held accountable for the crimes they committed while carrying out their duties with the Syrian regime.

He points out many precedents in the German judiciary . Many perpetrators of crimes were held accountable for crimes committed during the period of Nazi rule or the former German Democratic Republic, because changing loyalties does not exempt from liability at all.

Raseef22 met the German lawyer Andreas Schulz, a lawyer who heads a group of 4 lawyers, including Mohammed, who had filed a civil suit specifically against Raslan, in parallel with the criminal suits against him.

Schulz and his team currently represent a small representative sample of seven victims comprising of women, children and men representing different social situations and age groups, and the goal is to seek billions of dollars in compensation for the victims.

When the results of the civil lawsuit begin to appear, Schulz adds, this number of plaintiffs will be expanded to include possibly thousands of victims, revealing that these cases are done individually, as each individual case is separate.

Schulz has a clear plan ahead, as an attorney with several international criminal cases under his sleeve, he asserts that a criminal case judgment must be issued against the accused first, and accordingly the law machinery begins to roll in civil cases such as compensation for victims.

The Lawyer Andreas Schulz confirms that international law applies to an individual who has allegedly committed crimes against humanity, and when a crime against humanity is verified, the door is opened for criminal prosecutions in Germany, and then civil ones, including the claim for compensation for large groups of victims.

The indictment of Anwar Raslan includes "killing and torture under his command in Branch 251 prison, in the period from April 29, 2011 to September 7, 2012, where at least 4,000 prisoners were tortured by Branch 251, including exposure to brutal violence

As for his view on how the trial will proceed, the lawyer Khubaib-Ali Mohammed expects that "the main defendant in this case, Anwar Raslan, will receive a life imprisonment sentence."

For his part, Schulz expects that the German government will adopt a certain settlement policy with the Syrian regime outside the court (Ex Grazia) ,by which the Syrian state pays compensation to the victims under the table, in exchange for its acceptance again by the international community among the "civilized" countries. 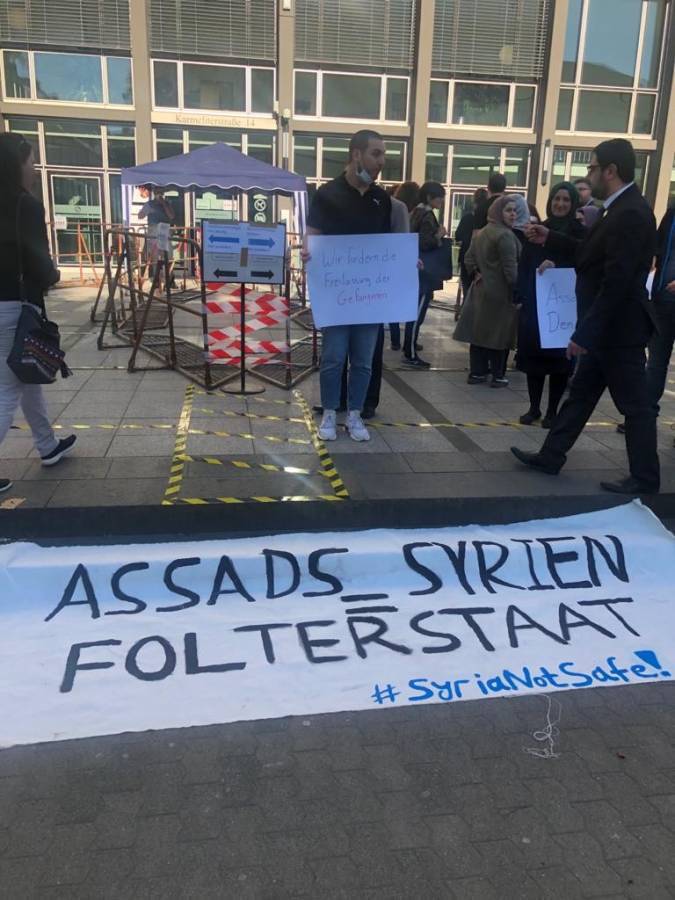 In front of the court

He adds that the German state has previously begun a similar path with the Syrian regime in the case of the ‘Maison de France` crime, so they could possibly employ the same political move today.

On the other hand, Schulz does not expect the Syrian state to recognize its responsibility for the crimes committed, while it may possibly agree to pay compensation without recognizing the crime, in order to polish its image, in a public relation move that might lead to the re-normalization of its commercial and financial relations with the international community.

Raseef22 contacted Syrian journalist Amer Matar, who stated: "I was arrested because of my journalistic coverage of the Syrian revolution in its early stages." Matar added that this trial has symbolic significance for him as "an opportunity to see he who imprisoned and tortured me in the past before the court, after I had lost hope in receiving justice. This is a great opportunity to have faith in justice. It is a message to every criminal that even if time passes by, the day will come when you will be held accountable. " Matar concludes that: "In prison, the comrades and I had hoped to bring all the torturers before court in free Syria, but with the dictatorship remaining, fate gave me the opportunity to sue someone in exile today."

Syria Untold: the Story the Regime Wants to Erase

"They were subjected to all forms of torture"... The Systemic Jailing of Syrian Children