Despite the Ministry of Health’s announcement of several corona cases across the country, Iraqis continue to protest, in Baghdad and other cities, against corruption, the political class, unemployment, the lack of services, and political quotas.

The Iraqi authorities and Iran-backed militias have not left a crackdown technique unused; they shut down the internet, weakened telecom networks, and went as far as kidnapping and torturing activists. This all but intensified the demonstrations.

Many have recently found a new technique to suppress protesters: Coronavirus, which was first diagnosed on December 12 in Wuhan, China, and has since emerged as a pandemic that reached Iraq through Iranian visitors.

Muqtada al-Sadr, the leader of the Sadrist Movement, tweeted on February 25 a call for people to refrain from protesting.

“I demanded that millions demonstrate, and to sit-ins protesting the quotas, but I now forbid you from doing so for the sake of your health and your lives, for they are more important than anything to me.”

Demonstrators interpreted this tweet as an attempt by Sadr to take advantage of the coronavirus to give the newly designated Prime Minister, Mohammed Tawfiq Allawi, a chance to form a government.

Al-Sadr had withdrawn his supporters, the “Blue Hats”, from the squares where people protested against the authorities, after having endorsed such protests. He switched sides after Allawi’s designation, abandoning protesters, but then called on his supporters to demonstrate once again. Protesters worried that this was an attempt by al-Sadr to hijack the uprising and drive them out of it.

Some protesters feared the spread of the virus among them, while others considered that it is not more dangerous than the death that is chasing them every day wherever they are demonstrating. 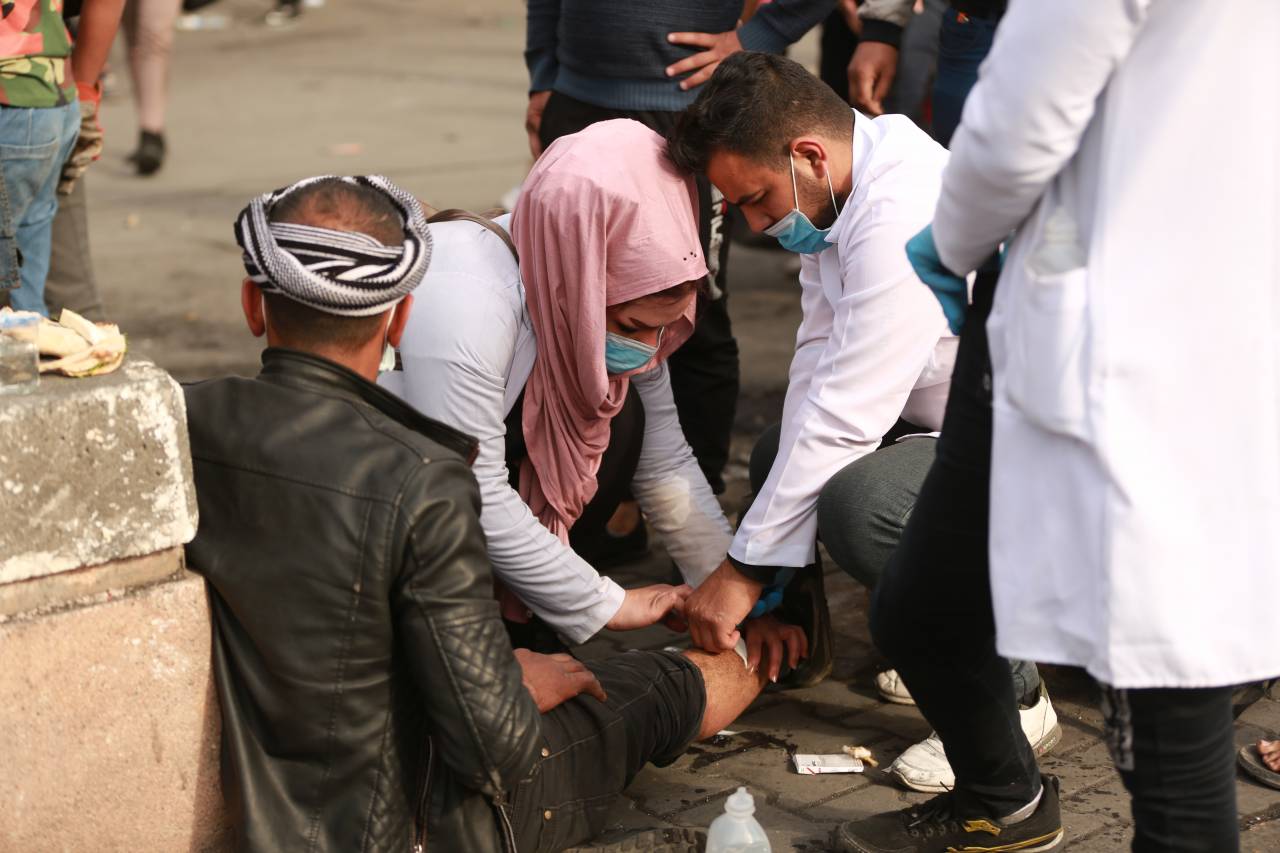 Corona scaremongering did not have a major effect on demonstrators; they have pledged to continue their uprising, as they demand comprehensive political reforms, which include the election of competent political figures, changing the constitution, and early elections.

Nevertheless, demonstrators in different Iraqi provinces, including Basra, quickly started to wear masks, and adopt safety measures that the World Health Organization published, and the Iraqi Ministry of Health circulated through different media. 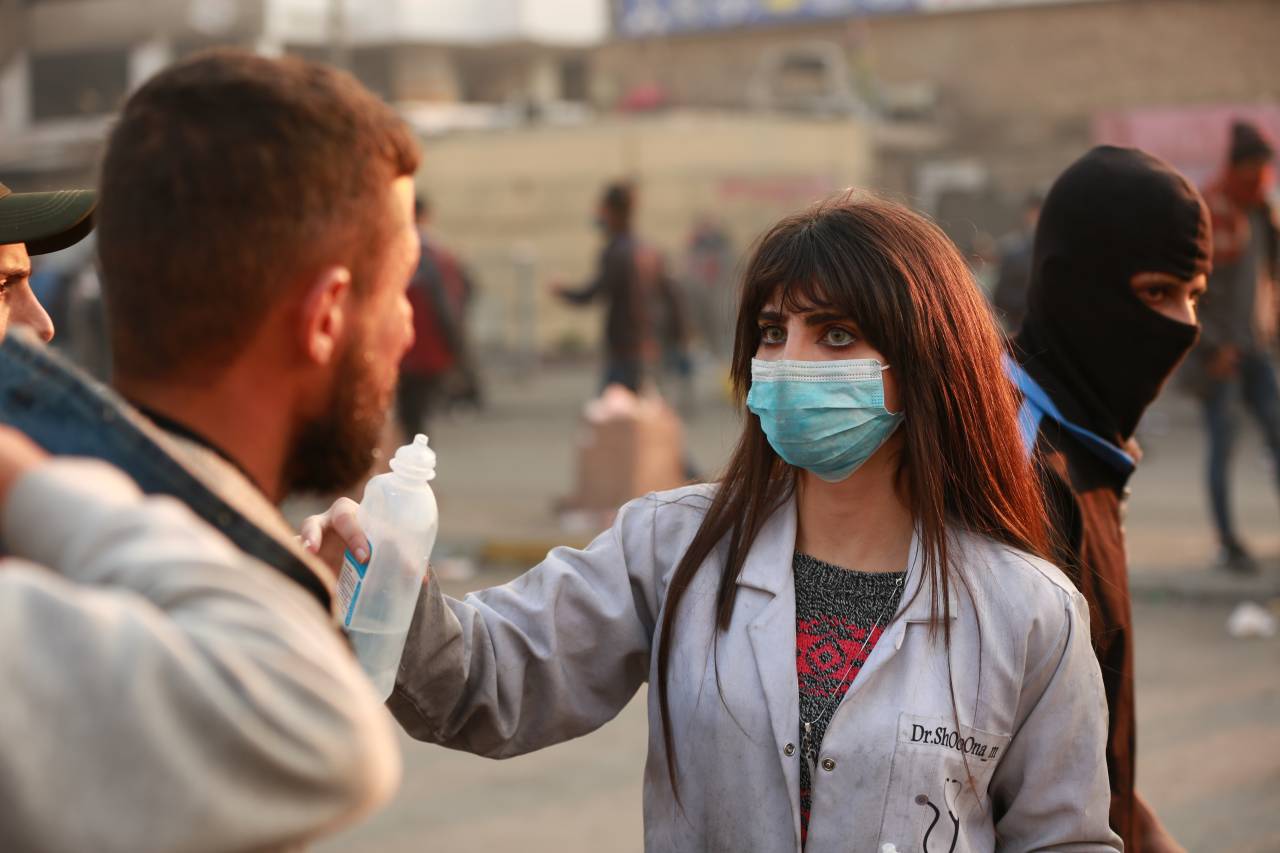 “Militias are more dangerous than Corona”

In spite of the horror that the virus has caused among Iraqis, protester Ali Laith Abdul-Amir, continued to demonstrate.

“I know very well that Coronavirus is a danger to our lives, and we have seen the bullets and the different methods of killing but we will not back down,” the 17 year old Basrawi said.

“It is not more dangerous than the government and its militias, that is why I have not thought about going back home” he said. “If I leave the demonstration squares now, this will weaken the momentum of a revolution whose squares I spent months in, demanding my rights.”

"Coronavirus is not more dangerous than the government and its militias, that is why I have not thought about going back home” said Ali. “If I leave the squares, I will weaken the momentum of a revolution whose squares I spent months demonstrating in”

Since the outbreak of the protests, at least 600 people have been killed and 25 thousand wounded at the hands of Iraqi riot police and armed groups linked to Iran.

“I have been demonstrating from the beginning of the protests and I have not spent one day at home, how do they expect us to remain at home?” wondered Ali. “If our health really concerned the government, they would not have killed us in the squares where we demonstrate.” 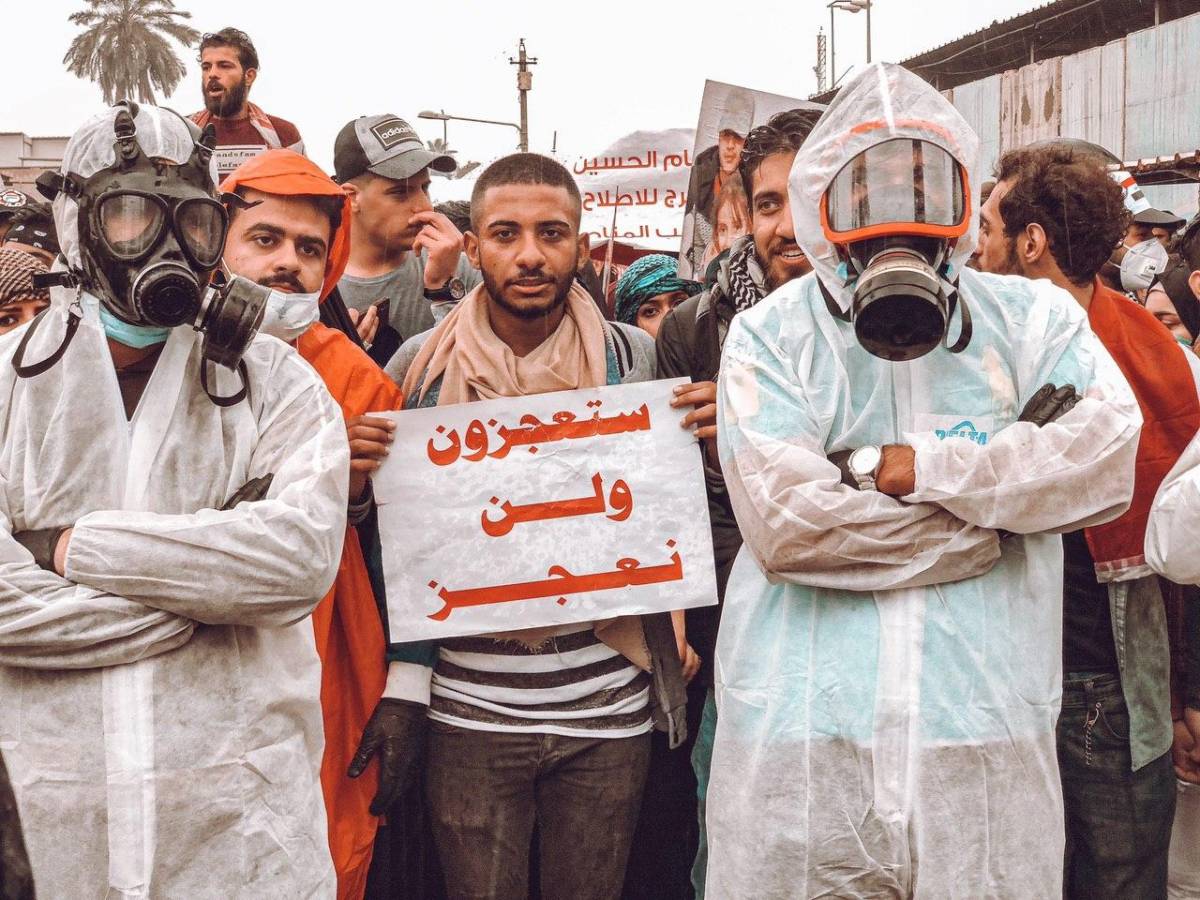 “I think that the government rejoiced in the emergence of the virus,” he added. “It thought that it would weaken the public uprising, but they are perfectly mistaken.”

“Awareness helped us continue the demonstration, and protect ourselves from Corona. I wore a mask even before Corona entered Iraq; I needed it to protect myself from tear gas, which the authorities are accustomed to firing at us.”

Ali adds: “A thousand viruses like corona cannot curb our protests as long as we have rights, and we will take then sooner or later.”

Protests in the age of Corona

“I do not encourage the continuation of protests, especially in the areas where cases of Coronavirus have been registered.” al-Qassem Ahmad, an activist from Baghdad said. “But there is an insistence on perpetuating the uprising. I therefore find it necessary to wear masks and gloves while in the squares.”

“We always mobilize on social media in order to call on people to come to the squares,” the 24-year-old activist said. “Even though cases of the virus have been recorded, we still demonstrate in huge numbers that exceed all the expectations of the demonstrations ebbing out.”

Speaking of the relation between Coronavirus and the protests, al-Qassem said: “The government is always taking advantage of new crises in order to extinguish the fire of the revolution, yet it has never succeeded.”

“The Iraqi government has made several decisions in order to limit the spread of the disease, including banning crowds in public squares, coffee shops, cinemas, and houses of worship.” 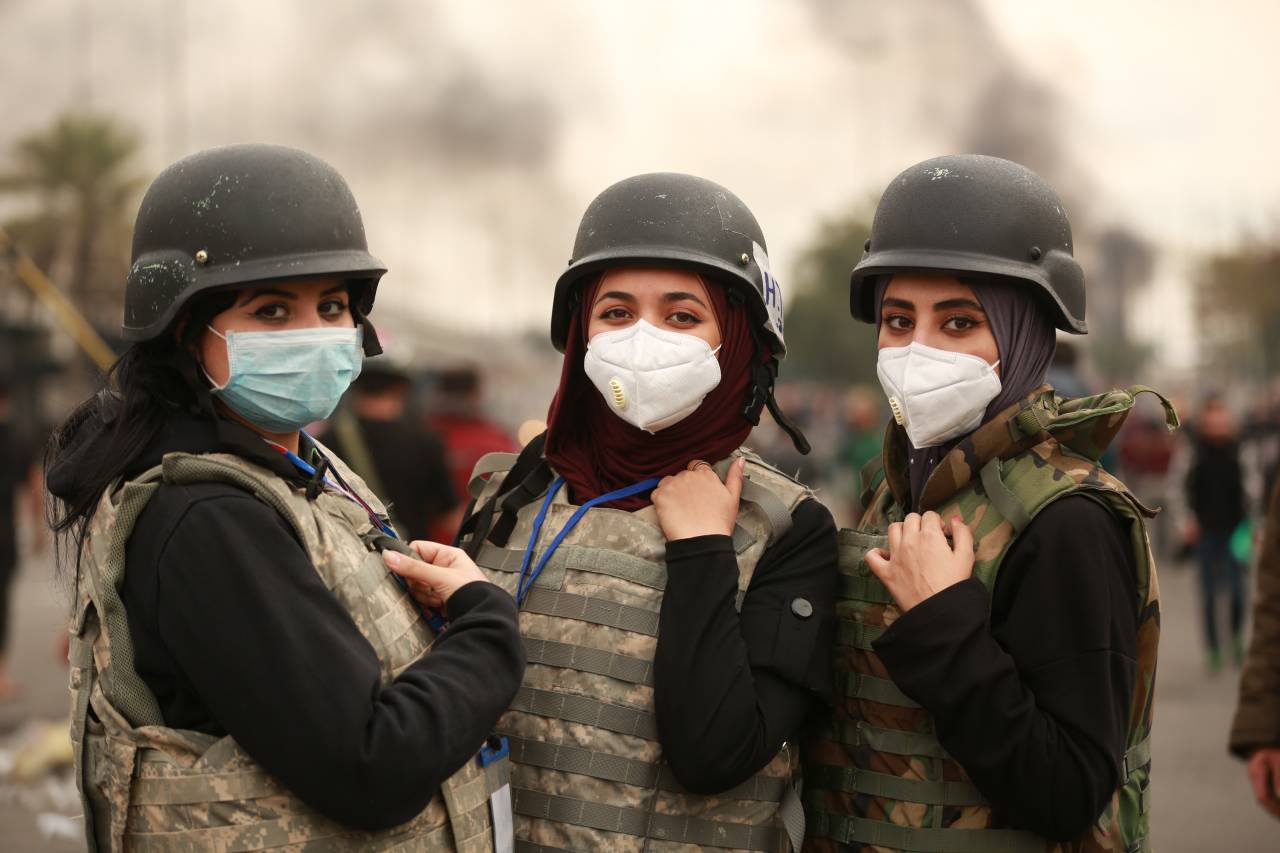 “All parties that oppose the revolution are trying to take advantage of the exceptional circumstances in order to inhibit the determination of the youth, a main one being Muqtada al-Sadr, probably,” al-Qassem added. “From the first day on which the virus reached countries that share borders with Iraq, like Kuwait and Iran, our new demand emerged: shutting down the borders with the countries that have announced the spread of Corona therein.”

Regarding the aforementioned al-Sadr tweet, al-Qassem said: “al-Sadr has cheap methods of hijacking or deviating the path of the revolution, however he pleases, not according to what the current situation requires. When he called for an end to demonstrations, he did that neither out of love for protesters nor for their own safety, but in order to end the revolution.”

“Before going to the squares to demonstrate, I put on the masks, I sanitize myself and I do the regular check of my temperature.” said Othman Jarallah a 22 year old demonstrator in Baghdad, Iraq

“Corona will not stop us; what we have undergone in the past four months is far worse. I truly do not consider this virus to be as serious of a threat to our lives as the parties that have been robbing and killing us since 2003.”

“Masks are not disgraceful”

In order to encourage protesters to wear the protective masks, activists on social media started a hashtag in Arabic that means “masks are not disgraceful.” Iraqis were receptive to the message behind this hashtag and the demand on masks increased.

“Unfortunately, the price of masks increased after the first coronavirus case was announced by the local authorities,” according to al-Qassem. 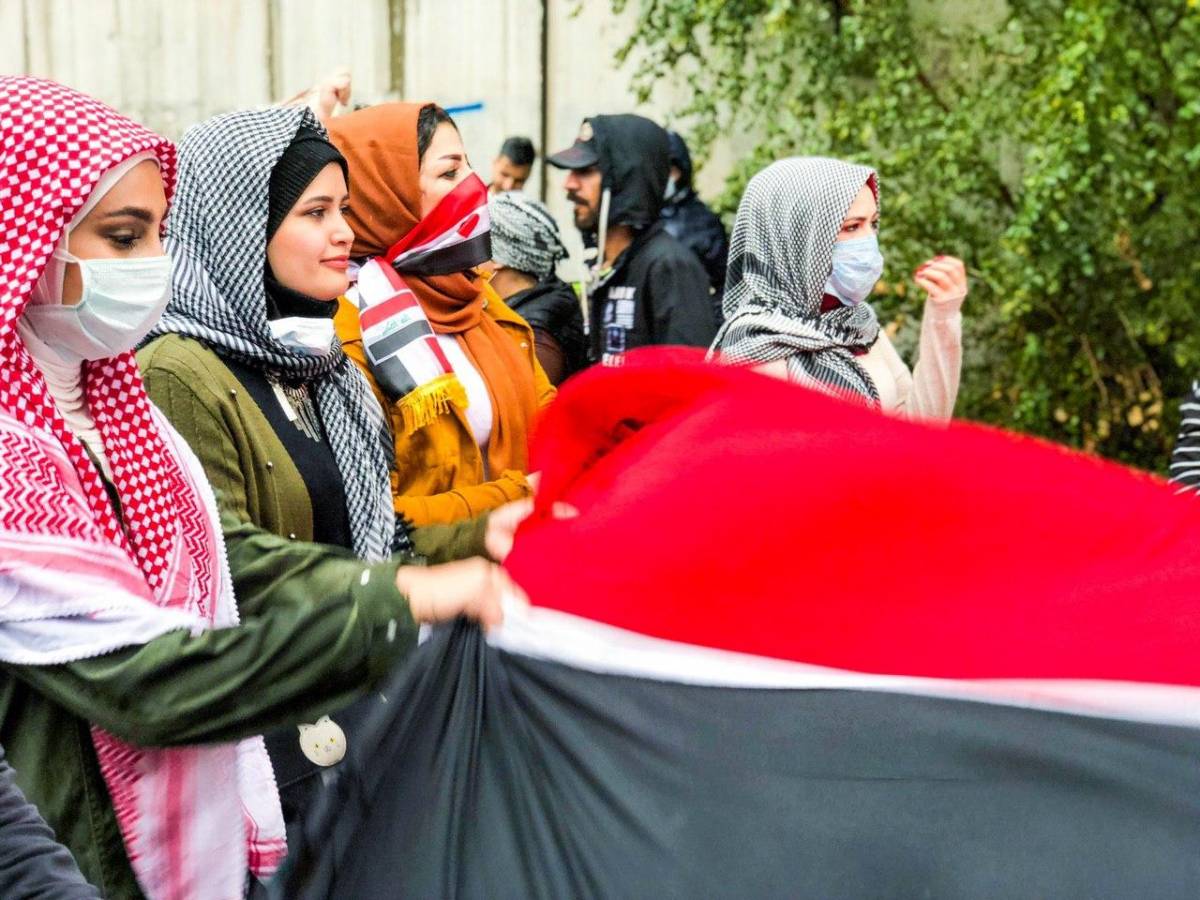 In view of the increase in the price of masks, Iraqis have resorted to creative methods, as Iraqis do, in order to avoid the greed of traders. Some have manufactured masks in particular sewing shops and distributed then for free on demonstrators.

Corona will not scare us

Othman Jarallah, 22, a demonstrator from Baghdad, told Raseef22 that the spread of Coronavirus did not affect his participation in protests. “We follow the correct safety measures in order in order to protect [us] from infection, there are educative campaigns that protesters have launched in liberation squares and the rest of places where there are protests.”

Coronavirus is not more dangerous than the government. We all insist on staying in the sit-in squares, and the numbers are increasing day by day,” he added.

“Before going to the squares to demonstrate, I put on the masks, I sanitize myself and I do the regular check of my temperature.”

What Othman said is in line with what Zahraa Ahmad, another 22-year-old protester from Baghdad said. “As long as demonstrators have health awareness, there is no need to fear Coronavirus; it will not affect our going out to the squares to protest. We are only committed to the medical recommendations that should be taken seriously.” 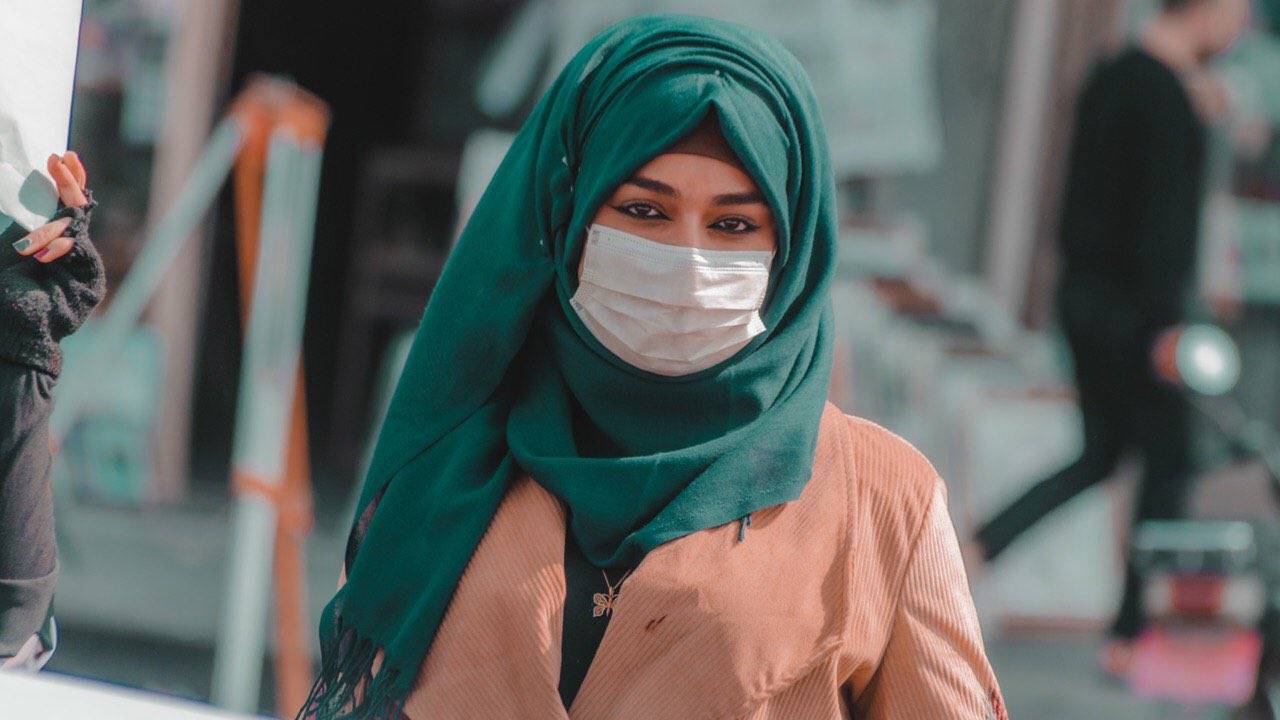 “Snipers, bullets, tear gas bombs, and sectarianism itself, were all more dangerous than the virus, yet they did not decrease our determination,” Zahraa said. “Corona will not send me back home; only pressure from our families to be extra cautious has increased.”

Commenting on al-Sadr’s call to cease demonstrating, she said: “We all know the excessive suppression of protesters that al-Sadr did.” She recalled what he said in his latest interview on al-Sharqiyah TV: “Demonstrators are my children and I look at them with a caring eye.” 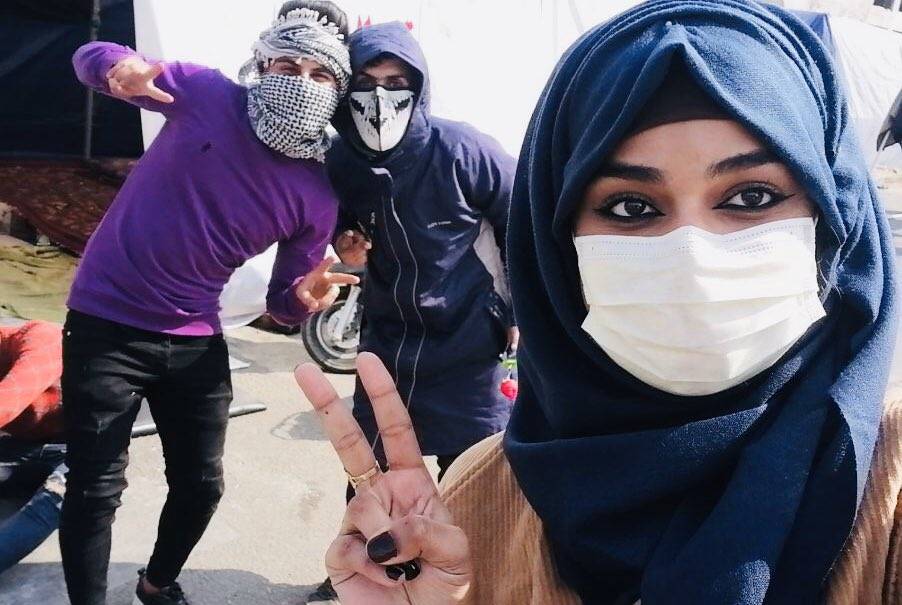 “Could al-Sadr really convince us that he is actually looking at us with a caring eye? Impossible,” Zahraa remarked.

New demands in the squares

After Iraq recorded its first case of Coronavirus in February: an Iranian citizen who entered the country before the ban on Iranians, Iraqis asked for the shutdown of border crossings and the cessation of flights.

Demonstrators carried out a sit-in in front of al-Najaf airport on the same day, in order to prevent traveling to and from the countries that recorded Coronavirus cases, especially Iran. In Basra governorate, citizens demonstrated on the road that leads to al-Shalamijah crossing, that connects Iraq and Iran, fearing that infected travelers could make it in to the country.

“I demand the current Iraqi government to take the Corona issue seriously and to not neglect our lives, and to commit to closing all airports and provide medical care in hospitals,” Zahraa said.

Harassing Iraqi Women In Media Is Always On the Menu

Islam and Homosexuality, Is There A Neutral Ground?