Mossab Nahed, a 38 year old man from Nablus, a city in the north of occupied West Bank suffered from severe anxiety until he took the decision to seek work inside Israel, for he had given up hope of finding a suitable job in the West Bank despite his qualifications.

"I went to the Israeli Coordination Office to request a work permit, I handed my documents and was told me that I will hear back in due course, I waited many days before the refusal came," said Mossab to Raseef22.

Mossab got depressed, but his friend Maher advised him to opt for the smuggling option, Maher had several successful experiences that allowed him to amass a good sum from Israel. He told him that he had chosen to be smuggled by hiding in a big transportation lorry that travelled from the occupied territories.

In June 2011, Mossab took the journey, he was unsuccessful, he was shot at and detained by Israeli soldiers stationed at a checkpoint near the border. He stayed in hospital for two weeks, then was transferred to prison and remained there for a year and a half.

He continued: "Five months after my release, I decided to try again, and I succeeded because it was through a broker whom I paid $2,000 to provide me safe passage to Israel, to workin agriculture for seven months before returning to the West Bank where he stayed for three months, after which he smuggled himself back in again.

The story of Mossab is one of thousands of stories of Palestinian workers from the occupied West Bank, who Israel refuses to issue work permits on security grounds.

Ahmed Suhail (42 years old) previously worked in Israel with an official permit until 2013 when his permit renewal was rejected, he resorted to official job brokers dealing with labor offices inside the Green Line, but he failed to find a job after a year wait.

He then decided to resort to the smuggling option and tried it for the first time in April 2014, and it was successful, he worked four months on an Israeli cattle farm before returning to his village Turmus'iya northeast of Ramallah.

Some 40,000 Palestinians illegally work in Israel. They pay high rates to be smuggled in, where they spend long hours toiling; Fearful of being caught, they are abused by employers and often denied all benefits and the final cheque.

Not only did they have to grow up under occupation and military rule, some 130,000 Palestinian workers in Israel must endure all sorts of discrimination, trafficking, abuse, and subhuman conditions to make ends meet.

Ahmed told Raseef22 that working without a permit inside Israel is not an easy matter, and there are considerable risks for the person and their family, workers become paranoid about everything around them, even the slightest gust of air , they do not speak a great deal for fear of calling attention to themselves. He said the last time he was there he was arrested by the Israeli police and imprisoned for six months, before being released and warned not to return again via smuggling. 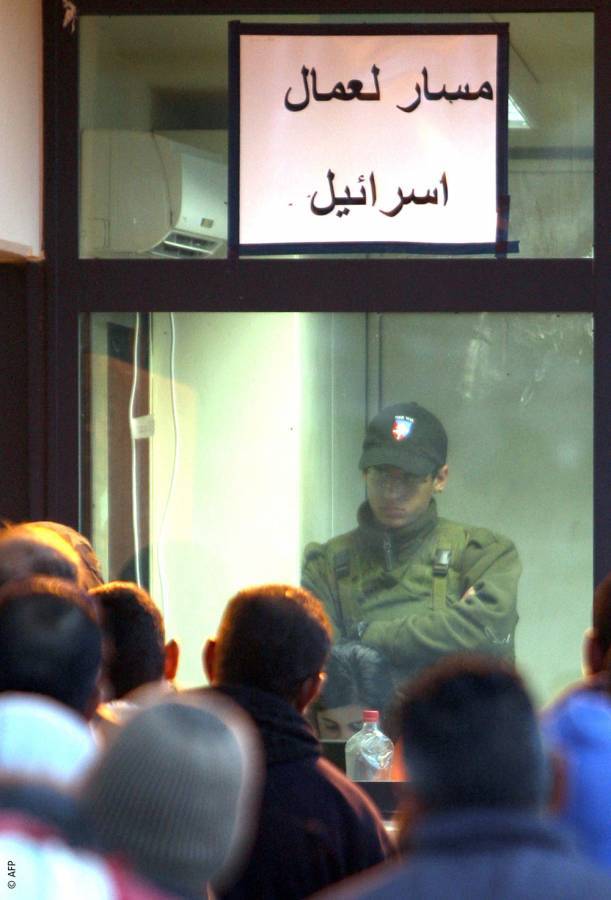 This did not prevent Suhail from trying again. On February 1, 2018, he decided to undertake a new adventure, and five people from his village accompanied him on the smuggling trip.

He describes how they waited until darkness fell and then took the al-Dhahiriya path, walking in the bush for miles, an Israeli patrol almost uncovered them. Suheil escapes from the difficult reality that he lives in the occupied West Bank since Israel controls most of its territory and resources, he has a family of seven.

“When I tried to work on the Palestinian side, I could not find a job that would earn me more than 2,500 shekels ($ 650) a month, which is a very small amount compared to the high cost of living in Palestinian cities,” Suhail says.

The occupied West Bank suffers from difficult living conditions and a lack of work opportunities, which push the heads of families and young people looking to build their future and form families to go to Israel any way they can to earn a living. 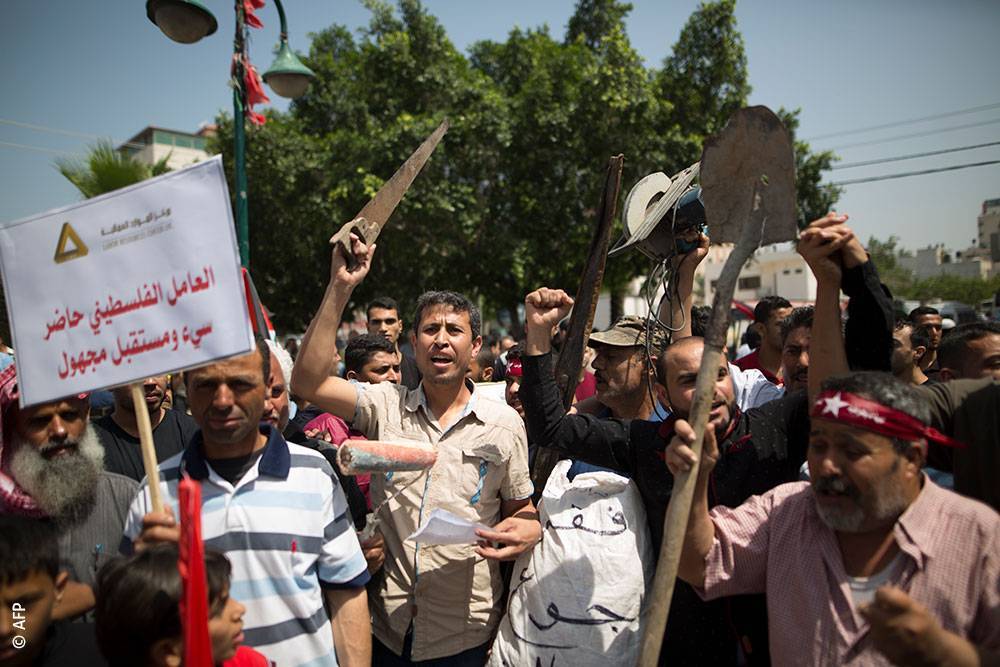 According to the Palestinian Statistics Centre, the number of Palestinian workers inside Israel exceeds 130,000, compared to 120,000 in the previous year, a third of whom work without an official permit.

Ayham (27) tells Raseef 22: "The smuggling experience is difficult, I did not think about it until after I was tired of looking for an opportunity inside the West Bank ... I first ventured in 2015 through one of the smugglers who are active in this field, and I found that the work inside the Green Line is lucrative, I make enough money to help me build my future, so I kept going.”

The young man in his twenties who works in contracting with an Arab company in the occupied city of Nazareth makes an income of more than 7,000 shekels (2000 US dollars) per month, but his workday is 10 hours long, he is forced to sleep at the work site for long periods of time, sometimes up to a month, enduring hot summers and freezing winter conditions. Ayham explains that he is consoled by the fact that the money he makes is close to the salary that the general managers of the Palestinian government receive.

One night when he was sleeping on the floor, he heard the sounds of Israeli police cars, and immediately he got up and hid behind the building where he works. From a distance, he watched the movements of the policemen. It became clear that they were looking for him, and he pointed out that he later learned that a minor dispute with a Jew inside Israel resulted in him being reported and the police forces raiding his hiding place.

He adds: "Entering Israel is not only good in terms of work opportunities, it also revives the soul and restores vitality, living in our beaiutiful homeland. Staying close to our deserted villages means a lot to us as Palestinian refugees, and many times I visited the city of Safed from which my ancestors migrated during Nakba of 1948."

He said that obtaining an official work permit is not possible at all because the Israeli forces classify him as "saboteur" because he was imprisoned several times during his university days due to his student and community activities.

Israel grants Palestinians permits through a system that differs between the West Bank and Gaza Strip and includes more than 74 different types of permits and the purposes for obtaining them vary between medical, occupational, academic, judicial, religious, and for visiting prisoners in Israeli prisons. 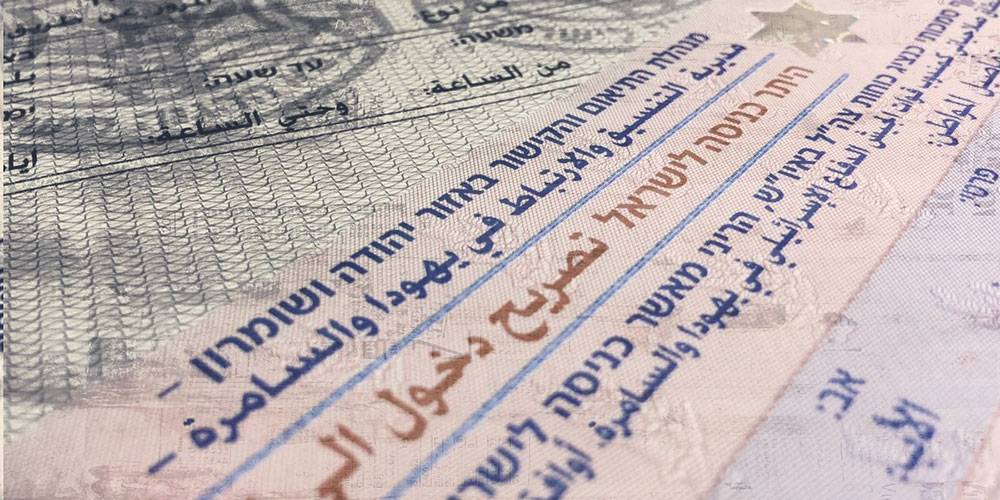 The laws governing issuing permits in the West Bank stems from the decree issued by the military ruler in 1967, in which the West Bank was declared a closed military zone and entry to or exit from it were forbidden except with a permit obtained from what is known as the Israeli district coordination offices, which are 31 in number.

A different story is told by Nihad Ibrahim (38 years), who works inside Israel legally with an official permit explaining that when he was twenty-nine he was able to enter Israel and work, and he worked for a business distributing goods to Israeli cities and was earning about six thousand shekels a month ($1,700).

He told Raseef22 that his work lasted seven years, and when he decided to leave it because of the mistreatment of his employer, he demanded end-of-service benefits, but he did not receive any because his employer denied him his rights and he did not have a legal document that would have enabled him to make a claim.

In the same vein, Mushir Nayef, 51, speaks: "From the beginning, I asked the administration of the plastic bag industry company that I used to work in in the occupied city of Haifa to provide me with an official contract guaranteeing my rights, but they used the excuse that it was difficult to give one to a Palestinian from the West Bank.

He added: "They promised that I would have all my rights if I decided to leave the job, and after several years they did not fulfil their promise, and they fired me after 15 years of work with no compensation."

Rami Mahdawi, director of the employment department in the Palestinian Ministry of Labour in Ramallah, had indicated, in previous press statements, that Israeli hiring companies were defrauding Palestinian workers in many aspects, including retaining end of service compensation and other benefits and also by tampering with contract formats to short change Palestinian labour.

This is not the only way that employers and the Israeli government violate the rights of Palestinian workers. There are many other way, for example by withdrawing permits that are withheld from time to time from families whose members commit acts of resistance.

In 2016, the coordinator of the Israeli government decided to freeze the permits of the children of the families of Abu Al-Rab, Kamil and Nassar from the town of Qabatiya in Jenin, after three of their sons stabbed someone and opened fire in occupied Jerusalem.