Since the military coups of the mid-20th century, that brought "modernist" secular ideologies, followed by the rise of political Islam, followed by Arab Spring and finally the Algerian, Iraqi and Lebanese uprisings, there is an abundance of political events that are labelled "revolutions."

Linguistically, the word appears clear in its origins, meaning and derivatives, but it is also a political terminology that has been surrounded with ambiguity when it comes to its definition and interpretation. What adds to this ambiguity is that it is not specific to a certain topic or topics: it could be scientific and hence a "scientific revolution"; similarly it could be industrial, cultural, social, political – as well as personal revolutions.

The Problems With Revolution

There is no precise definition for the term in the dictionary, which makes it easy in describing certain phenomena, for there is a broad space in which it could be deployed.

The problem appears when what has taken place or is taking place is measured according to the French or Russian Bolshevik revolution. If we take the literal meaning of the singular form of the word "revolution", whose root is derived from the Late Latin word "Revolvere" and which is an offshoot of the verb "revolve" – to turn and rotate – we may find a close meaning in a full rotation or turn where change is inspired by the relationship between the earth and the sun, or the moon and the earth.

Whatever it may be, the turns are many, but giving the word revolution a positive and desirable value – as is prevalent – leads to a contradiction when we deploy it to describe a paralyzed Middle Eastern context. The problem is further accentuated for example when we address the question of why "revolutionary" French students choose not to use the term "revolution" to describe the student movement of the year 1968, despite it being decisive and influential. 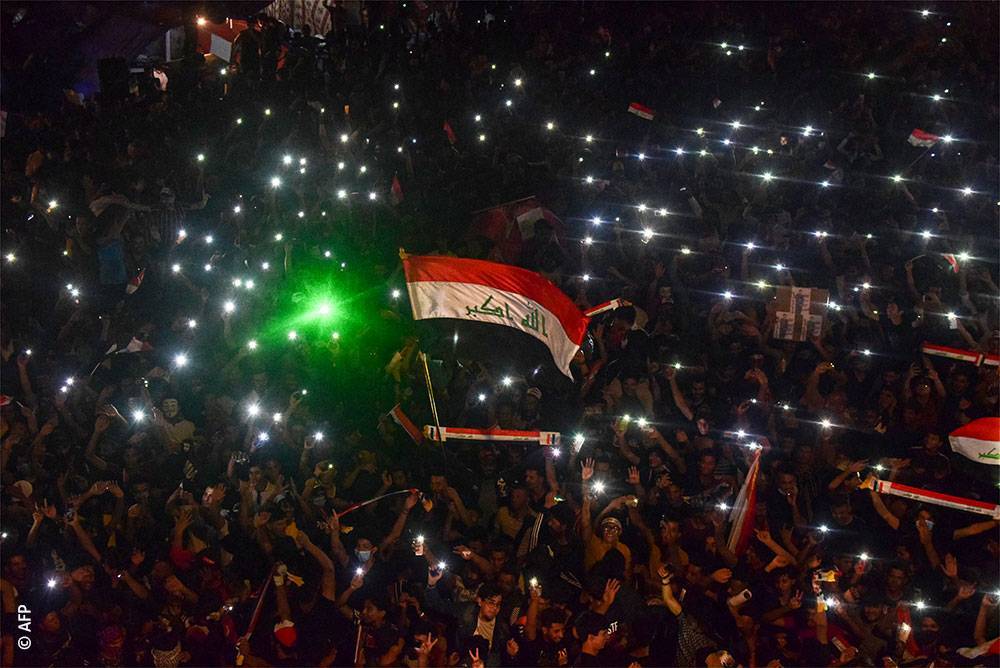 Revolution, meaning the event that creates root and broad-encompassing transformations, is not a term that is always positive. Transformations are necessary for the durability and sustainability of life, but do not always lead to the desired end-point or the proposed goal and beautiful dreams. It can lead to adverse effects and create disappointing patterns and modalities. France itself suffered an excess of bloodiness, and its revolution culminated with Napoleon Bonaparte, and what accompanied him from vanity, destruction, wars, invasions and internal repression – as well as his glory, symbolism and effects which he left in the whole of Europe.

We return to Iraq. What is taking place in its streets pleases the heart, and resurrects hope with the efforts of brave segments of society, despite the blood that has been shed by the regime's machinery, as well as the influence of the shadow regime and foreign interests.

The photographed scenes and anecdotes reveal what is more than a series of protests, and it could be said now that there are no demands for specific policies as much as there are for major political change. Meanwhile, there are revolutionaries who try to find their way to foment a major turn. Confronting them is a political process filled with catastrophes, and a political reality riddled with destruction and ruin. What is written on banners is not important – at least, not as important as the movement in general, which reveals the voice of change.

If popular action only creates a purely political change, it does not exceed the results which can be achieved by a military coup, an external intervention or an assassination of the head of a regime. Individuals, parties and groups may fall, to be replaced by others within a certain framework – for things to end at that juncture, with a new political elite rising to power. This of course is a form of revolution, but is one that has limited effect in formulating the future of a country that should be presupposed to have suffered enough in order to learn and know better.

What is taking place in its streets pleases the heart, and resurrects hope with the efforts of brave segments of society, despite the blood that has been shed by the regime's machinery, as well as the influence of the shadow regime and foreign interests.

What is for certain is that the current movement in #Iraq will pave the way for a new stage. Until now, it is not a wide reaching revolution, but part of a chain cooking up a real revolution.

There is another meaning for revolution, a deeper one, which ends ruling groups, and excises or treats the reasons for the dispersed state of Iraqis; at the same time being governed either by a dictator, military cliques, religious parties, groups supported from abroad or mercenaries and thieves.

It is still too early to realize whether there have been deep social, political and cultural change that has taken place. What is more true is that change is not the product only of today's movement and mobilization, but is inextricably tied to a chain of continuous events in Iraq since  2009/2010, and which will create more waves in future stages.

Transformations in Politics and Governance

The new Iraq, or to be accurate, the pre-2003 Iraq of the monarchical and republican eras, witnessed many uprisings and protests, which resulted in transfers of power and government; however, it did not create real change in the reality of the country and the nation. Later, after that regime fell and the United States occupied Baghdad, an influx of insurgents facing the occupation took place without first confirming whether they enjoyed a popular base for their actions; instead, they were propelled by factional interests and initiatives by certain individuals, militias, organizations and nearby countries, as well as the Jihadists who arrived from abroad.

An Algerian colleague asked me, bewildered, why there was no popular Iraqi uprising against the Americans, believing that there was a popular fear of Washington which prevented them from raising their voices against it. I answered him, in a way that even deepened his bewilderment, that opposing Americans became the easiest form of protest and the least costly one. The flaw and defect was in choosing the option of armed resistance as the main form of protest against the American presence; thus there was no revolution, but armed groups that represented themselves and not the Iraqi people, or represented certain factions and segments.

It was also no coincidence whatsoever that the start of the countdown for the disappearance of US forces from the streets of the cities took place after the signing of a security agreement, which entailed the withdrawal of US forces by the end of 2011. This was also the countdown for the outbreak of protests in cities which did not take the form of militias, terrorism, resistance and weapons, as well as other terminologies in common parlance and usage during the US occupation; instead, it removed a cover to reveal an unarmed social movement, which the repression of the regime could not pacify. Indeed, in 2009 the first protests broke out in Basra, with two protesters killed; the protests were sparked by the demand for better services.

The real beginning of continuous protests began in 2010, under the slogan "Baghdad will not become Kandahar", and it was the first rejection that spread to the streets in refusal of policies of Islamization of the state and the repression of civil liberties. Here we could detect a major change: people did not resort to arms, not in that protest or the ones that followed. They stood by their choice of peacefully facing the regime with its iron and fire.

In 2011, the 25th of February protests took place, in response to Arab Spring. In 2012, sit-ins began in the provinces of Anbar, Saladin, Nineveh, Kirkuk and other regions, which were confronted with violence before ending completely with the occupation by ISIS of wide parts of Iraq. This was followed by protests unprecedented in scale in Baghdad and other provinces in 2015, whose spark was the murder of a protesting young man in the province of Basra. Indeed, the protest began as a secular movement, raising slogans that angered the religious current. However, the mismanagement of the movement by some activists empowered one of the leaders of the political process – by that I mean Muqtada al-Sadr – to lead the protests, clearly exploiting the opportunity to control the next Iraqi parliament in 2018. Thus it could be said that 2015 was the year of secular protests, while 2016-2017 were the years of Sadrist protests.

The Chronology of Iraq's Popular Movements

The chronology in the Iraqi street's popular struggle against the ruling authority, albeit encompassing attempts to steal the protests, 'ride the wave' by certain figures, as well as mistakes and failures, nonetheless represented one of the most important phenomena taking place parallel to the ballot box.

Indeed, it is notable that such popular protests take place in a country that hosts parliamentary and local elections every four years; this could be read as an admission and recognition that elections were incapable of representing the street – in other words, that elections were unable to create democracy.

For the elections were controlled by the post-2003 parties, which were sectarian or ethnic in nature or were mere instruments belonging to powerful individuals and foreign parties, and which became clearly evident failed to represent real popular choices; thus society needed its protests and uprisings. When it failed to achieve its goals Iraqi society elevated its aspirations and determination in a way that was not accustomed to in the country: young women and men as well as the old remaining in the streets for days without boredom.

This could be read as a generational change, though I do not think this is purely the case – for those present and the victims belong to various age groups and a plethora of social segments; rather, it is the aspirations for change embodying an awareness and consciousness that Iraqis were able to acquire through the margin of freedom they possessed, simultaneous to the loss of many of their youth in wars that were in large part caused by the ruling powers.

Ultimately, if the latest movement fails to produce direct change, perhaps many will be subject to security pursuit amidst the control of the armed groups and the Iranian influence, as well as the fear by those in power that the protests would repeat themselves. Yet what is for certain is that the current movement will in any event pave the way for a new stage. Until now, it is not a wide revolution for change, so much as being part of a chain manufacturing a revolution of real changes, or a 'turn' to create another Iraq – one where it is impermissible to return the rule of the military or replace one group of tyrants with another single one; rather, it must create for itself a new socio-political reality that paves the way for the (re)birth of a country and nation.