Thousands of people joined a demonstration in Kuwait on Wednesday evening at Al Erada Square, a historical public square located in front of the National Assembly, to voice their concern on the rise of corruption and the abuse of power by various parliamentary members and the government.

The protest took place after Saleh Al Mulla, a former MP, announced on Tuesday that he will be holding a silent demonstration. “My main reason for organizing the demonstration was to send a message to the government and parliament members that the Kuwaiti people are fed up with the status quo and that we need an end to this corruption,” said Al Mulla.

“In my opinion the protest was a success before it even started because people were talking about the issue even before the demonstration began,” said Al Mulla. “Therefore even if only 10 people showed up I would have been satisfied.” 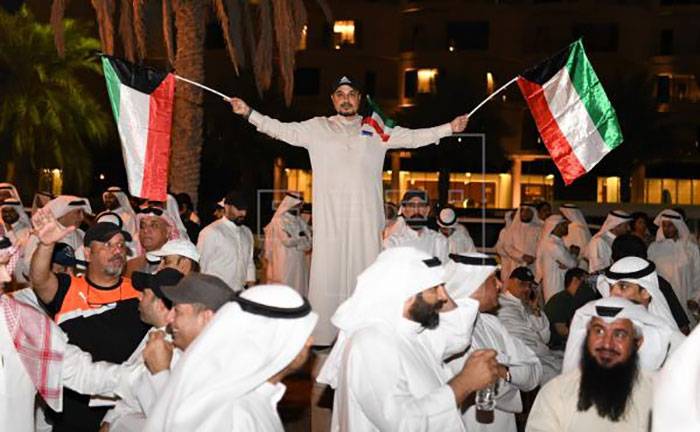 Since Tuesday, a hashtag created by Al Mulla has been trending on twitter #بس-مصخت (that’s enough). “The hashtag resonated with people as it expressed their frustration over the ongoing corruption that has plagued our country,” said Al Mulla.

The protest is the largest demonstration to occur in Kuwait since the 2011 ‘Orange Movement’, which took place during the Arab Spring. 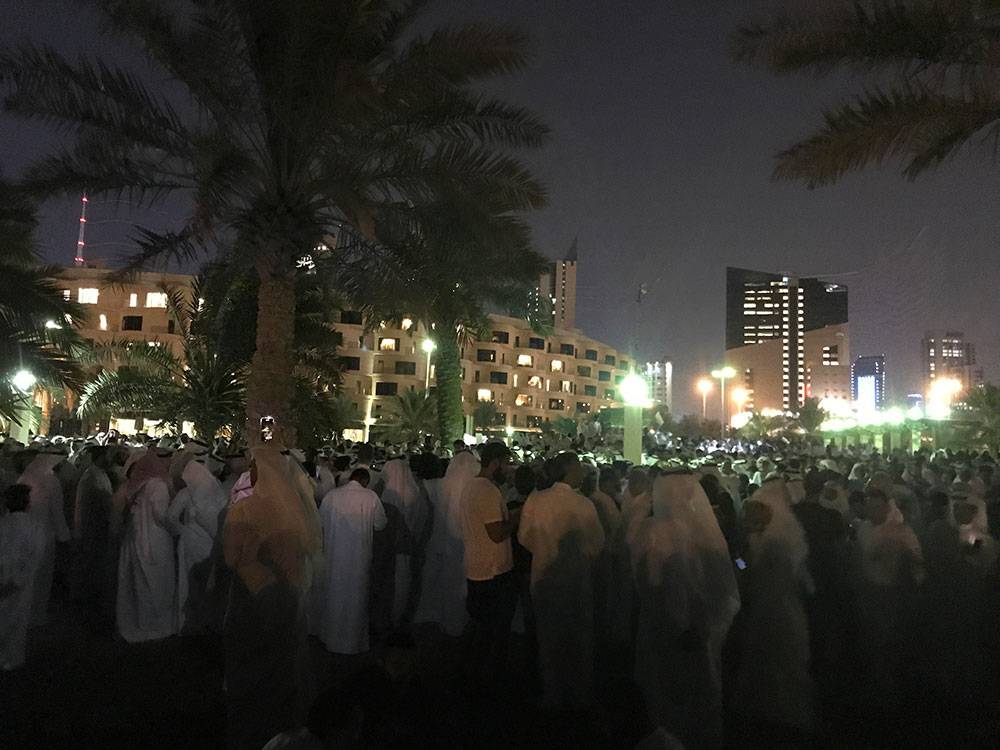 Although the demonstration was categorized as a silent protest, various people gathered in small groups around the square where they listened to individuals and parliament members discuss a range of issues.

Speaking to a crowd, Abas Al Shaabi, a vocal member in Kuwaiti society, said “Do you accept what is happening in your country?”

Kuwait is a welfare state that provides its citizens with free healthcare and education, amongst other benefits. Although the Kuwaiti people enjoy many benefits, the reality is that many of the governmental hospitals are run down, infrastructure projects are frequently delayed and the country is witnessing a growing garbage crisis.

One of the protestors blamed the government, National Assembly and the ruling elite for the rise of corruption. “Members of parliament are the ones that elect the ministers and those same ministers are the ones that give out bids to private companies that are meant to build the roads,” he said. “Yet it takes years to build a bridge or fix the highways.”

After eight years of silence, Kuwaitis participate in a silent demonstration to address a surge in corruption, and the abuse of power by various parliamentary members and the government. Has the Arab Spring finally reached the GCC?

One of the richest nations in the world, Kuwait is a welfare state providing free healthcare and education, alas at an ever decreasing standard, infrastructure projects and garbage collection are also showing signs of stress and neglect. 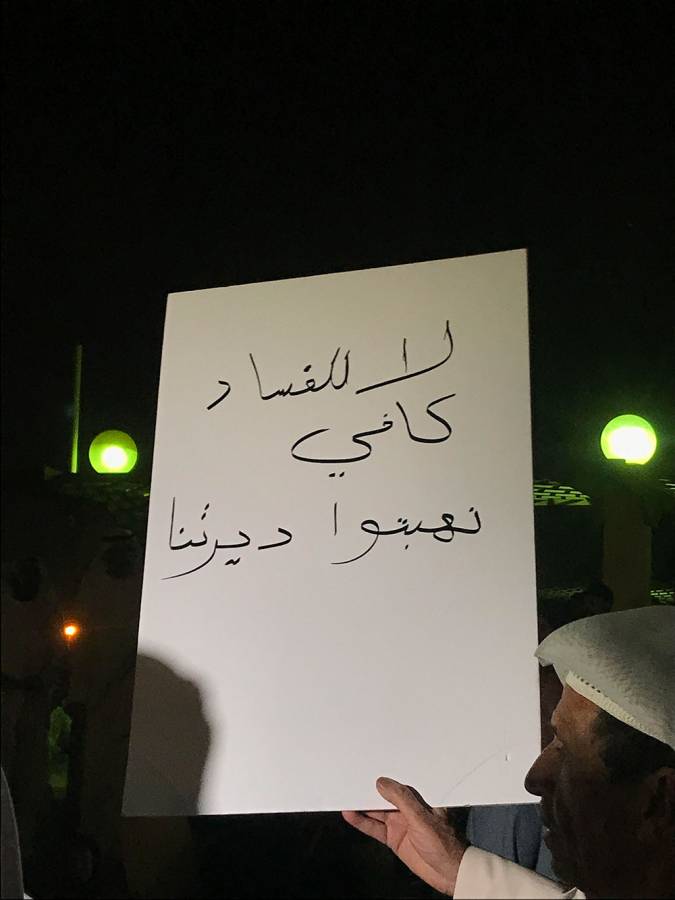 Last Tuesday Marzouq Al Ghanim, Speaker of National Assembly, stated at the opening of the fourth session of the legislative term that Kuwait does not suffer from heightened corruption, as people claim.

“The problems have been mounting for years, but I think what sparked the demonstration was the National Assembly Speaker’s statement earlier this week that patronized the Kuwaiti people,” Al Mulla mentioned.

Protests throughout the square were calling on the Speaker to resign as they could be heard chanting “leave Marzouq”.

One of the protestors, who claimed he is under security restriction for criticizing Al Ghanim, took part in the demonstration to address the increase of power that has been allocated to the Speaker.

“There are newspapers in Kuwait that refer to Al Ghanim as ‘the ruler’ although he is [only] the ‘ruler of parliament’. [He] is limited, they should not give him more power than he deserves,” he said. “The only ruler of this country is His Highness the Amir Sheikh Sabah Al-Ahmad Al-Jaber Al-Sabah.”

Another protester expressed his discontent with the current political climate. He mentioned that “members of parliament make it seem that they are doing us a favor when they bring forth laws,” he said. “Yet keep in mind that we are the ones that elected these people, so what they are doing for us is not a favor it is their job.”

Taking part in the demonstration were a large number of Bidoon, a stateless group of people that are deemed as ‘illegal residents’ by the Kuwaiti government. Bidoon activists and allies joined the protest to call on the government to provide the Bidoon people with their basic human rights like citizenship, healthcare and education. 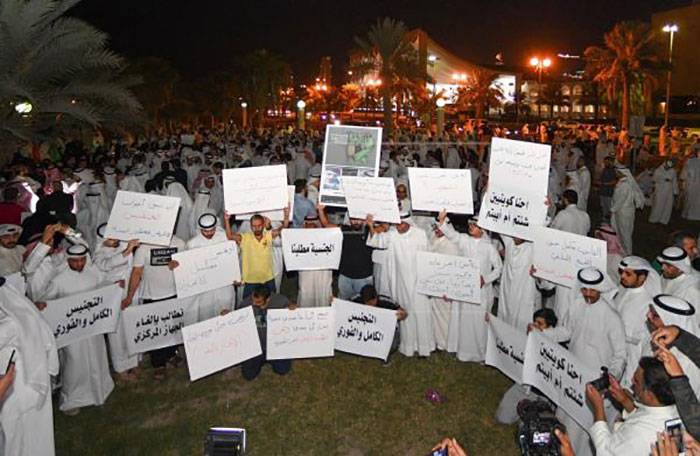 The protest concedes with a seminar that took place on Tuesday, where Al Ghanim announced that he and various parliament members were working on a bill that would solve the Bidoon case. A day before Al Ghanim held the seminar, two Bidoon men committed suicide. According to circulating rumors, one of the men committed suicide due to the ongoing humiliation and deprivation he has faced.

According to Minority Rights, there are around 100,000 people that are registered by the Kuwaiti government as Bidoon. The Bidoon do not receive any of the benefits that their Kuwaiti counterparts do, therefore many live in poverty. While some Bidoon have a reference card which allows them to enroll in private universities, work in the government and obtain healthcare, others do not even have the right to a birth certificate.

“We are holding a peaceful protest because we do not want to see our country plunge into violence or be torn by a civil war like our neighbors,” said one of the protestors.

“I do not know what the next steps are and I do not plan on holding another demonstration,” mentioned Al Mulla. “I just hope that the government listens to the people’s demands and takes the appropriate measures to end the cycle of corruption within the National Assembly.”

What is happiness to a young Arab?

“Write in the light, be angry and revolt”: 7 Arab women writers who became icons of feminism

'There is no sword like Zulfikar': how the legendary blade captured the imagination of Shia Muslims