At the end of the last decade, writer Malu Halasa and designer Rana Salam came from London to Syria, with the aim of discovering aspects of Syria’s culture and the Middle East in general. In 2008, they published “The Secret Life of Syrian Lingerie - Intimacy and Design” which gives am insight into Syrians intimate lives.

The authors of the book, both of Middle Easter origins, were captivated by the remarkable contradiction between the conservative and religious nature of Syrian society in general, and the boldness found in women's lingerie shops, often frequented by young brides or married women mostly in Damascus and Aleppo. 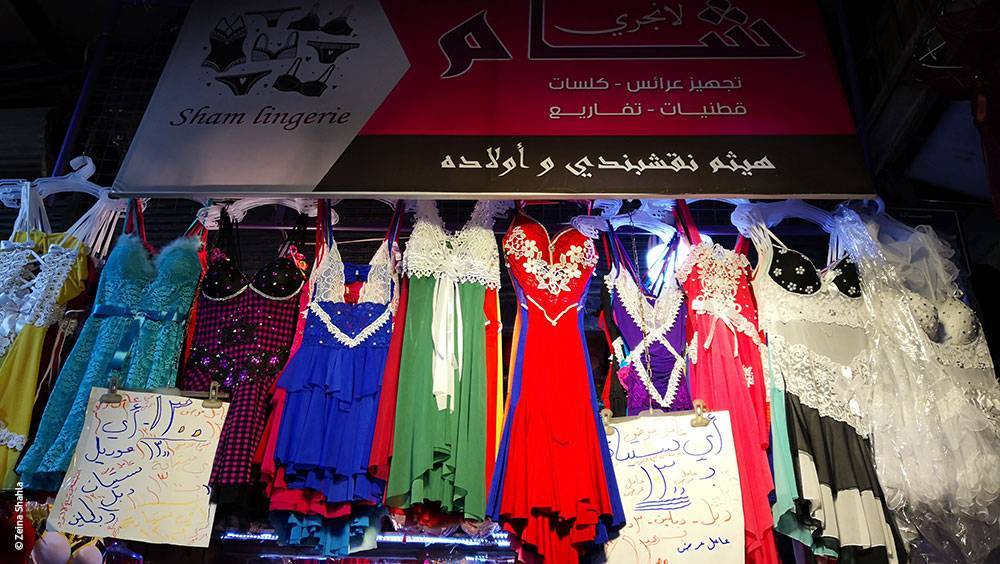 The elegant book with its colourful photos shows different images of what can be found in some of these shops: underwear decorated with birds and butterflies, covered with feathers or issuing sounds or lights or even vibrating. Others included different accessories, such as a small mobile phone or plastic toys, some are made of dried fruit. The designs of many of these pieces are inspired by belly dancing outfits or the handicrafts that Syria is famous for and are usually embroidered using a single needle and all are made locally in workshops within the country.

In addition, the book includes pictures of mostly blond Eastern European girls modelling the lingerie. Most stores have catalogues showing pictures of non-Syrian models since Syrian society frowns on girls showing off their bodies.

Through numerous observations and encounters inside and outside Syria, and even through incomplete interviews with people who refused to answer certain questions, the writers talk about the contradictions in Syrian society which oscillates between conservatism and modernity. Halasa and Salam did not aim to state that Syrian women are oppressed but rather aimed at shedding light on a different aspect of their worlds, part of their popular traditions and the importance of underwear in married lives, and about the different roles, they are expected to play, both inside and outside the home. 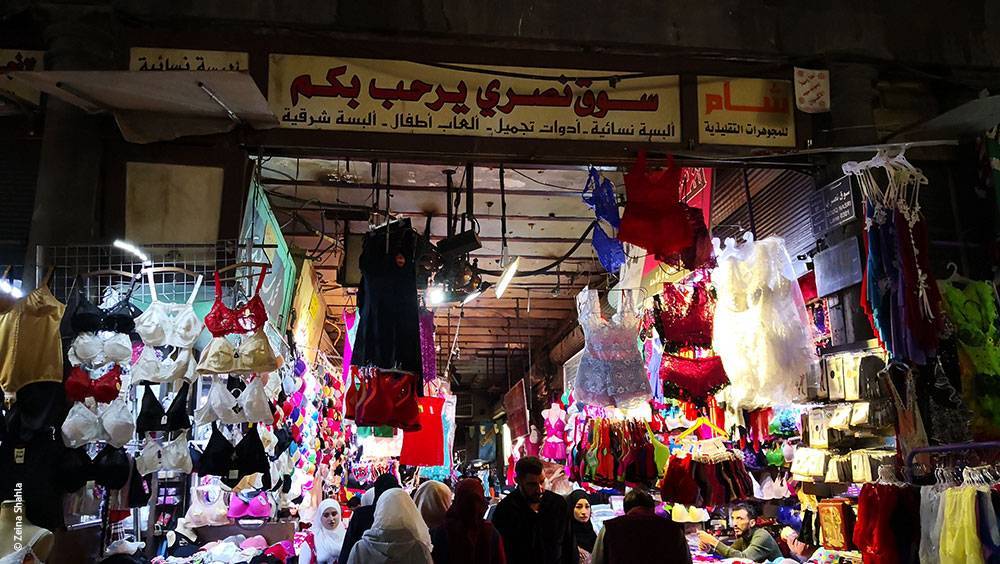 Almost ten years after the publication of the book, it seemed interesting to discover the changes in that "secret world", especially after the violent war in Syria which has cast a shadow on all Syrians without exception, a visit to one of the most famous women's underwear markets in Damascus - Nasri Souk would be most telling.

Nasri Souk which lies in a small roofed street, branches off from the most famous souk in Damascus: Hamidiyeh. Until the middle of the last century, it was known as the Tarabish (or Fez) market and there are two stories to why it carried that name: the first says that it was dedicated to the sale of Tarabish, that is, the red fezes that men used to wear, especially during the Ottoman era, and the second story attributes the name to the Tarabishi family who owned the market, then the name changed to Nasri after the Nasri family, who hail from the Jobar neighbourhood of Damascus, bought the entire Souk. 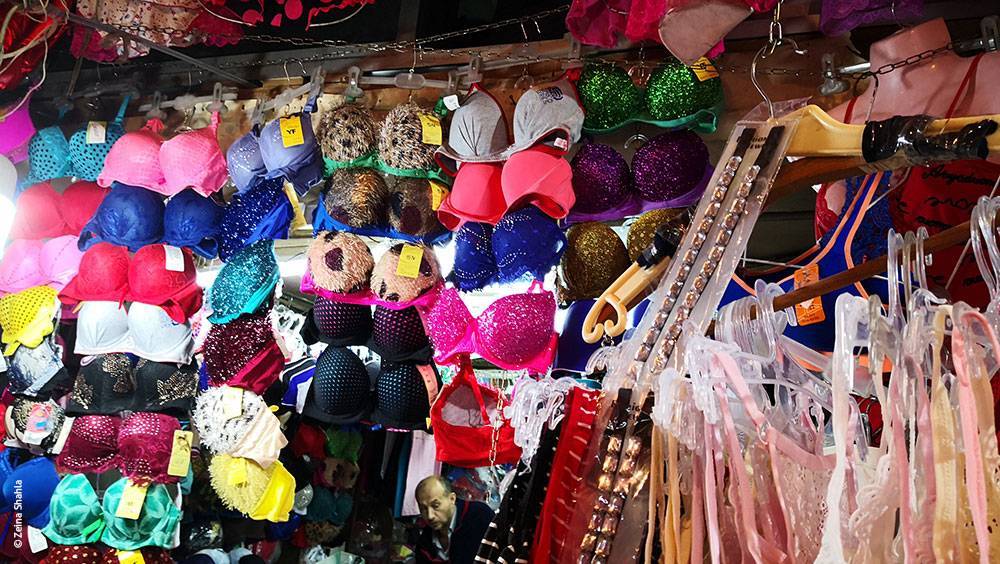 However, as of the mid-1960s, this market began to shift to the sale of women's underwear and tailoring supplies, and a decade after that it became the city's most daring and popular market, especially for girls from middle-class families who are putting together a trousseau, also every woman who wants to spice up her marital life goes Nasri market to find unique items.

The Secret Life of Syria’s Lingerie, a telling tale of what has happened to Syrian society: less disposable income, less innovation, less production, less inhibition, and younger brides. Thrill seekers in an otherwise grey life is what keeps shops open.

Syrians were always at peace with pleasure and sexuality, especially in the big cities. A visit to Damascus’ Souk Nasri lingerie stalls reminds one of the real priorities in life: temptation and thrills.

Today it’s hard for visitors to miss the market which lies along the long Hamidiya Street. The entrance is topped by a banner: ” Nasri Souk Welcomes You" and is decorated with bright colours and underwear in different designs. The market contains no more than twenty shops some of which are simply tables on which undies are displayed while other shops can accommodate some customers inside.

Most days these shops are crowded with women of different age groups and social backgrounds looking for specific items, or just shopping for the latest designs. Like in most Syrian markets, women in Nasri market spend a lot of time choosing the best items and then negotiating with vendors to get the best price they can. 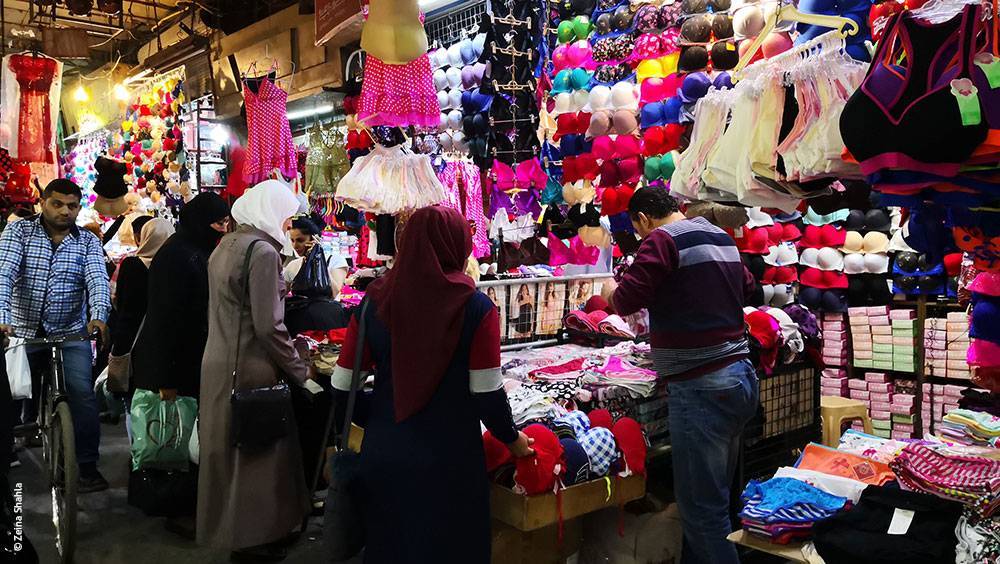 The observations of the Nasri Souk shop owners about shoppers purchasing habits compared to pre-war are very interesting, these reflect Syria’s evolution terms of social, economic and cultural changes that cannot be ignored or denied. 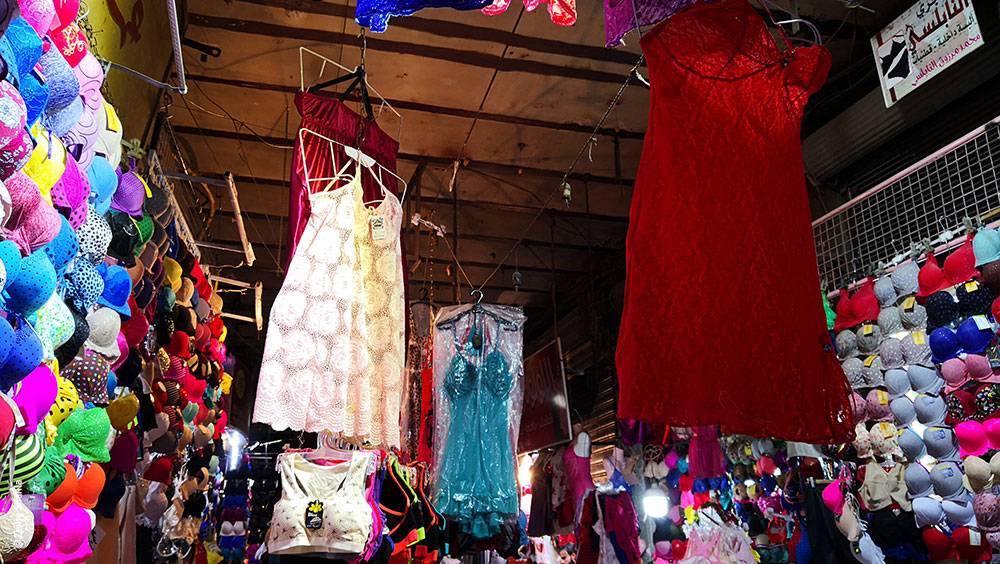 “The biggest change in Syria are decency and kindness”. “The houses were destroyed, we can rebuild them”. “People died, may God have mercy on their souls, but what has happened to people’s spirits will need years to mend” says one of the shop owners, asking to remain anonymous as did the rest of the people we interviewed, they don’t like journalists and fear that talking to them would bring trouble”.

I asked him "What do you mean by morals changing?" He replies that the Syrian war has cost hundreds of thousands of women their husbands through death, exile and travel while other women have been denied the chance to get married due to the disproportionate migration of men, the war has also pushed many to marry at a very young age, meaning there has been an increase in the number of divorce. “Girls have been exposed from an early age to sexual matters, they would not have such exposure were it not for the war, sexual matters have become commonplace.”

Others talk about the positive psychological effect of buying underwear, especially those with bright colours, which justifies the demand for them. “If a woman or her husband experience depression, and that is quite common during war, it’s our duty to bring joy to their hearts.” This seems to be the slogan of the market where shop-owners pride themselves on being on-trend with colours and models “meeting the demands of customers searching for everything new”. 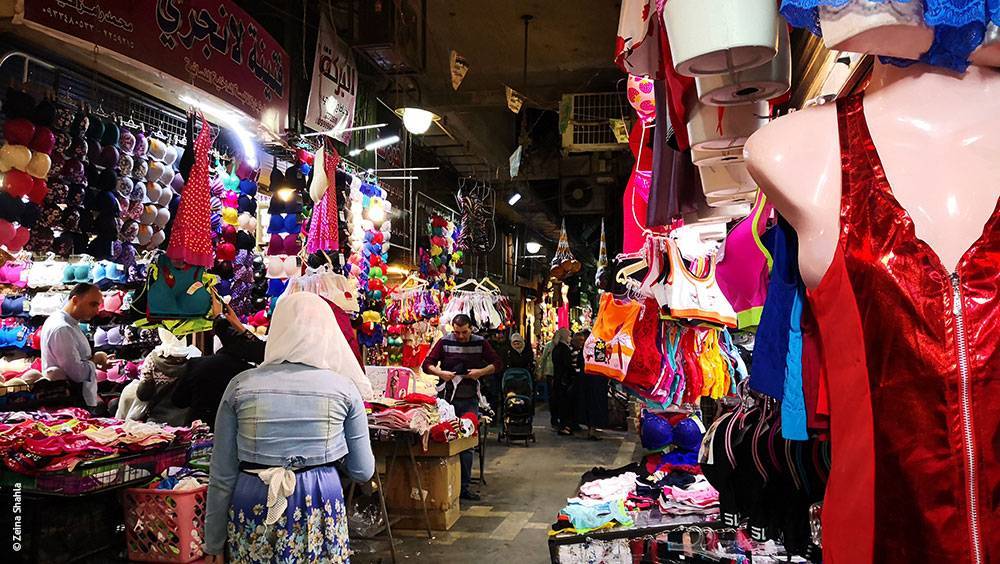 These trends include the introduction of bright colours like yellow, pink and violet, and the use of materials such as beads and shiny elements of all shapes. Some shop owners spoke of the high demand for new designs not only from Syrian customers living in Damascus, but from Syrians living outside the country, and even from customers from neighbouring countries like Lebanon, Iraq and, most recently, Jordan - after the reopening of the crossing on the Syrian-Jordanian border.

It is not difficult to notice many designs featured in "The Secret Life of Syrian Women's Lingerie" but things are not what they used to be, shopkeepers say, many factories closed their doors and their owners have left the country, securing the necessary raw materials has become difficult. "Most stores had to give up lingerie sets that produced music, responded to clapping, or could be operated with remote control as importing some of the elements has become difficult.” 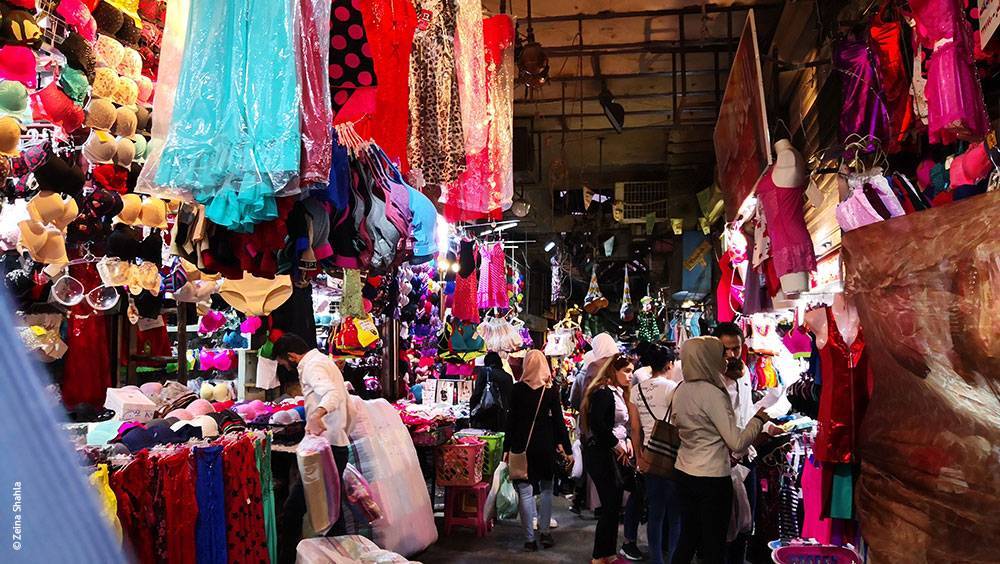 Of course, none of the sellers overlooked the impact of the deterioration of the value of the Syrian currency and the deterioration of the economic situation throughout the country on sales, especially since the customers of this market are the middle class who were affected most by the economic effects of the war. Some talked about how women are buying only crucial goods and how priorities have shifted for female breadwinners who are forced to think about securing food, clothes and medicine for the children in the absence of their husbands and how there has also been a drop in the number of tourists that would visit this market specifically, many said: "This year's sales are the worst ever". 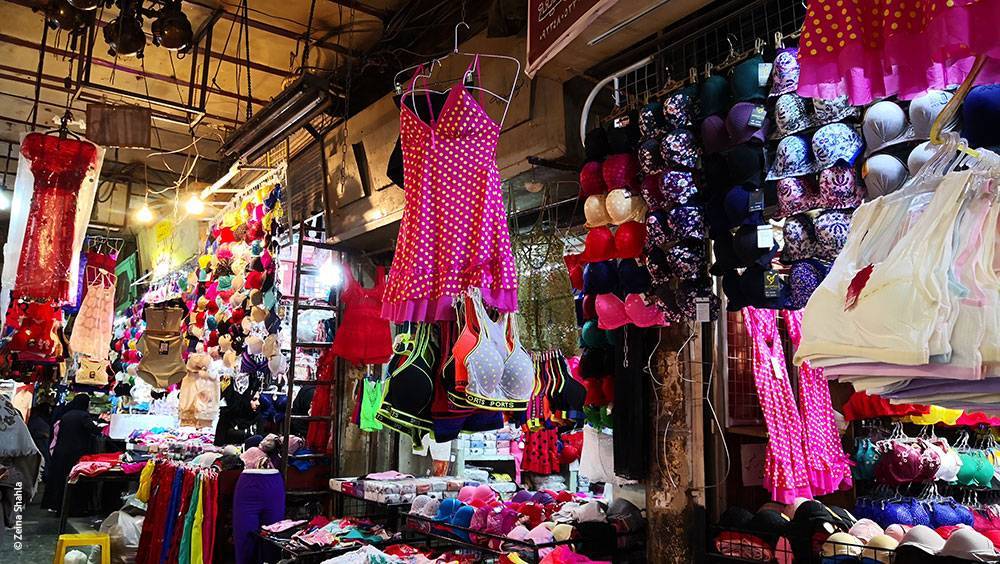 In all cases, shopkeepers agree that the underwear trade has not and will not experience a decline no matter how harsh the situation in the country turns. "On the most dangerous days, when the shelling was at its worst, we still had dozens of customers. Lingerie is a necessity for many women, sometimes more important than food and drink," says the last person I interviewed, with a broad smile.