On October 22, Egypt’s streets flooded to knee-high levels. Heavy rainfall killed 19 people in seven governorates. Traffic stood still. It took up to eight hours to go from one district to the other in Cairo. Children in school buses were stuck. The elderly were not spared either. Images of a policeman directing a man in underwear to go into one of the water-filled tunnels floating on a tire drew sarcasm online. But the chaos and the lack of government action to face the changing climate was nowhere near funny. 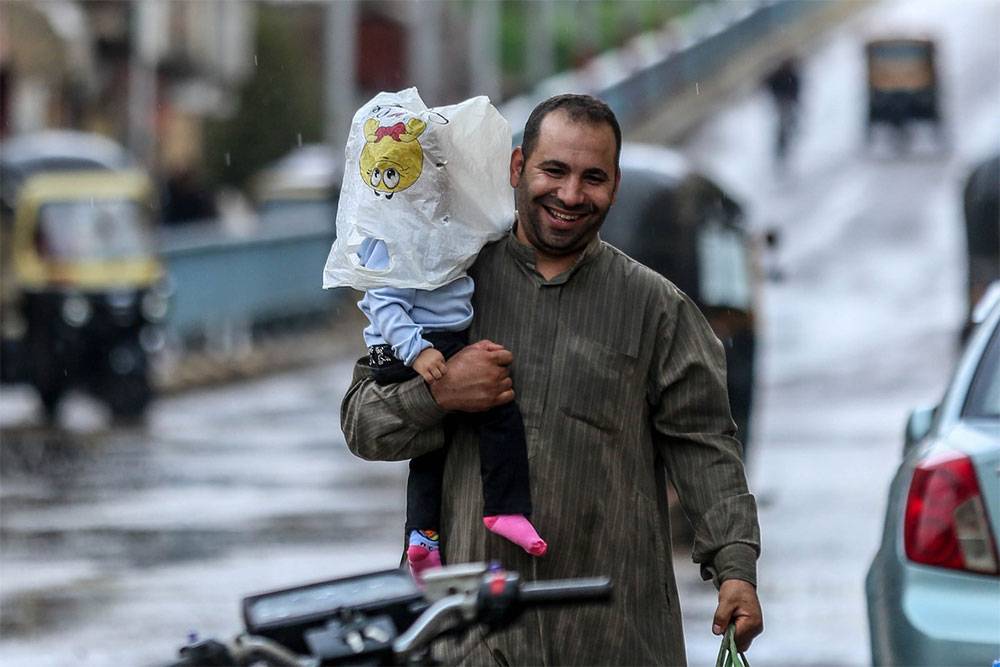 "My mind can’t help but think about the cascade effect that global warming has on the Earth’s water cycle and consequently the global precipitation rate," environmental researcher Nada El Shanawany told Raseef22. She explained that with increasing temperature, evaporation rate is expected to increase, and as such rain is expected to increase in some areas of the world. 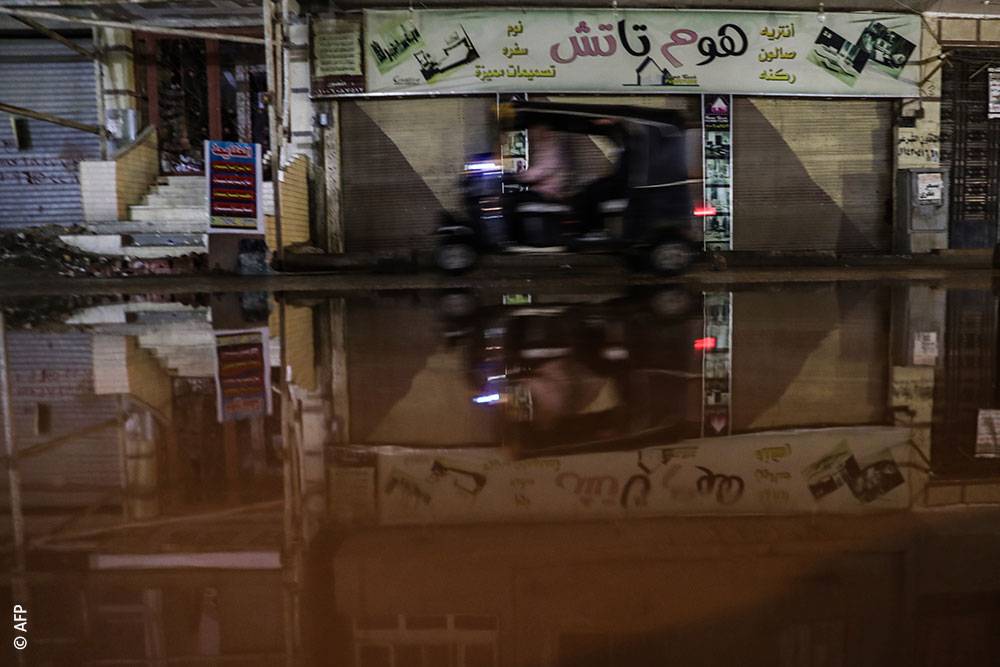 Heavy mud along a street in the Faisal district of the Egyptian capital's twin city of Giza late on October 22, 2019

"Although heavy rains only occur on a few days in Egypt, the consequences linger. Having pluvial flooding...can cause a lot of damage to buildings and infrastructure,” El Shanawany said. Indeed, two of the 19 deaths were the result of a building collapsing in Alexandria.
The country has been facing the same problem recently around the same time of the year. In October 2016, 22 people were killed because of flooding. Speaking to Raseef22, environmental rights advocate Waleed Mansour said that rainfall is expected to be more haphazard in the coming years. But rather than moving quickly to address the flooding problem, the government faces it with the dismissive catchphrase “it happens in other countries around the world,” Mansour said. 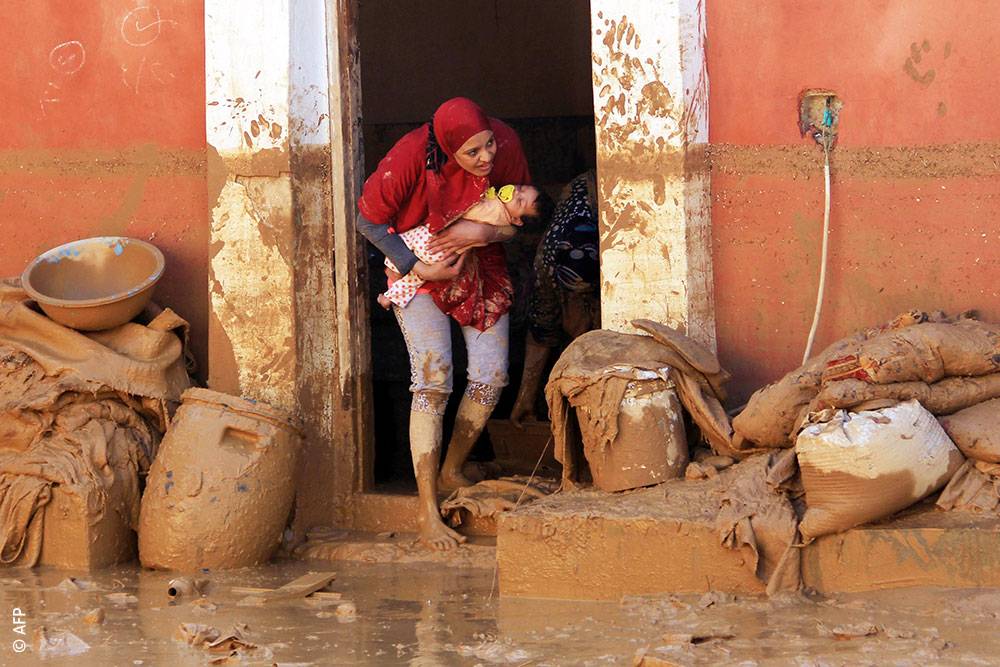 Woman carrying her baby as she stands on her doorstep in Ras Gharib.

“In other countries, when meteorologists expect these incidents, governments evacuate areas, shut down schools, and cover electricity poles”, Mansour stated. The Egyptian Meteorological Authority had warned of unstable weather, yet no action was taken. “Other countries also have proper drainage systems, where water is returned to rivers and put to good use,” Mansour asserted.

Egypt is in dire need of fixing its piping, rain drainage and sewage systems, said environmentalist Mansour. adding that “this is not just to avoid the crisis we just had but also to make sure we utilize every drop of water, given our water shortage”.

"The excuse of money shortage is nonsense," Mansour believes. On 23 October, Egypt received funding of 500 million USD, from the Global Environment Facility. 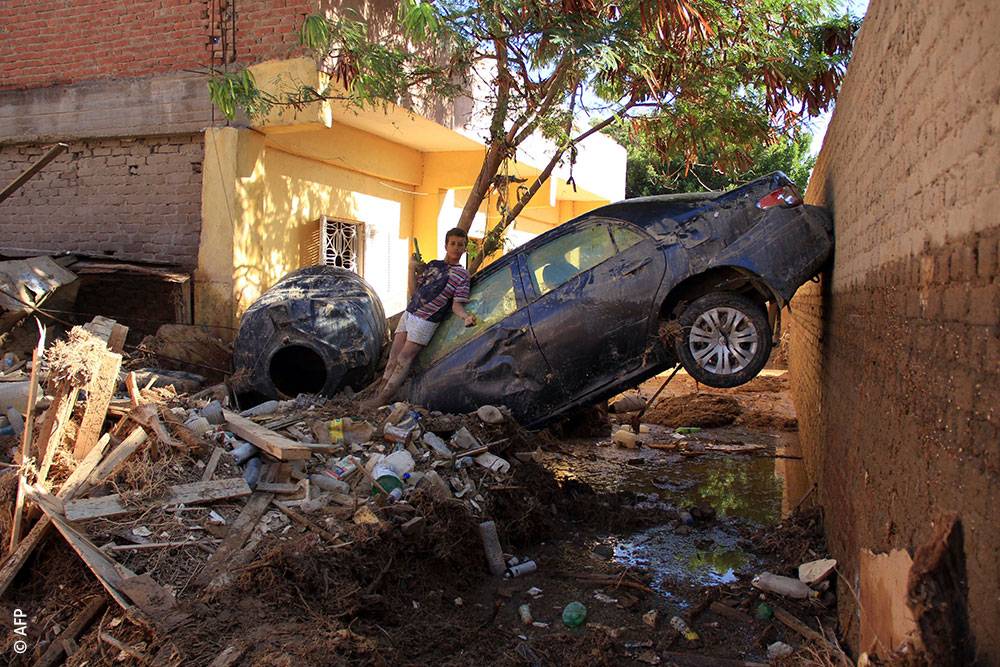 A picture taken October 29, 2016 shows a boy leaning on a damaged car in Ras Gharib.

““The state does not prioritize environmental governance,” Mansour said, highlighting how Egypt’s infrastructure is not only unready for the climate crisis, but adds to global warming. Buildings are made out of material that absorbs heat during the day, and releases it at night, which causes a heating effect similar to that felt in the air when standing between two turned on cars. This leads to the overuse of air conditioners. Also, public transportation is “inhumane”, so people use more cars, emitting more carbon, and rather than adding much needed green spaces to urban areas, the trees are being cut down.

Egypt should install emission sensors on highways to “detect pollution levels''. Egypt does not have an emissions cap, despite being a signatory to the Paris Agreement, producing 0.6% of global carbon emissions, too much for a non-industrial economy''.

Egypt is in dire need of fixing its piping, rain drainage and sewage systems, said environmentalist Mansour. adding that “this is not just to avoid the crisis we just had but also to make sure we utilize every drop of water, given our water shortage”.

In addition to flooding, the climate crisis is bound to hit coastal cities more severely. According to a study back in 2004, “the potential impact of climate change on coastal resources are ranked as most serious”. Yet the state took minimal serious steps to adapt for future impact on coastal cities.

Nowadays, the coastal threat has become more urgent. A study published on Tuesday in Nature found that sea level rise will affect triple the number of people previously anticipated. Dr. Scott Kulp, senior computational scientist and one of the authors of the study, told Raseef22 that four million Egyptians appear to be below the projected level of annual coastal flood risks. He estimates that the number will rise to 4.6 million by 2100, “assuming global [carbon] emissions are reduced to the targets in the Paris Agreement”.

Even though the elevated land along Egypt's coast protects part of the population, “Egypt's coastal cities...will still need to build and improve defenses”, Dr Kulp stated.

The only visible adaptation measures being taken are in Alexandria, with a barrier installed along the coast. Mansour criticized the process of manufacturing the cement for the barrier as it has a dusting effect, and is energy intensive, resulting in the production of more greenhouse gases that cause global warming. The barrier also has become a platform for garbage accumulation, he said.

Mansour laid down the pathway for constructing a climate resilient foundation for the country.

“Streets and infrastructure should be built in a climate sensitive manner, this means rain collection, proper urban ventilation, and buildings that allow for a natural and continuous cooling effect,” he said. “This also implies the use of natural resources from the environment around us to build houses and buildings in general that not necessarily require artificial cooling or heating,” he added. Solar panels should be installed atop houses and buildings as well.

Climate resilient infrastructure also entails public transportation with low emission and less dependence on personal car use, Mansour continued. There needs to be more promotion for pedestrianisation and cycling to lessen pollution.

Egypt also needs more green spaces, the environmental advocate said. “It is easy to calculate how much green per capita is needed, and the government should just plant trees that compensate for the carbon emissions every citizen is responsible for.”

The government should install emission sensors on highways or in the city to “at least detect the levels of pollution,'' Mansour said. Egypt does not have an emissions cap, despite the fact that it is a signatory to the Paris Agreement, he noted. Egypt produces 0.6% of total global carbon emissions, “which is still too much for a country that is not industrial'' he believes.

Turning to clean energy is also on the list. “Egypt is marketing itself as an oil and gas hub, even though it has vast areas where we could build solar and wind farms,” said Mansour. As for coastal protection, mangrove forests are the way to go. 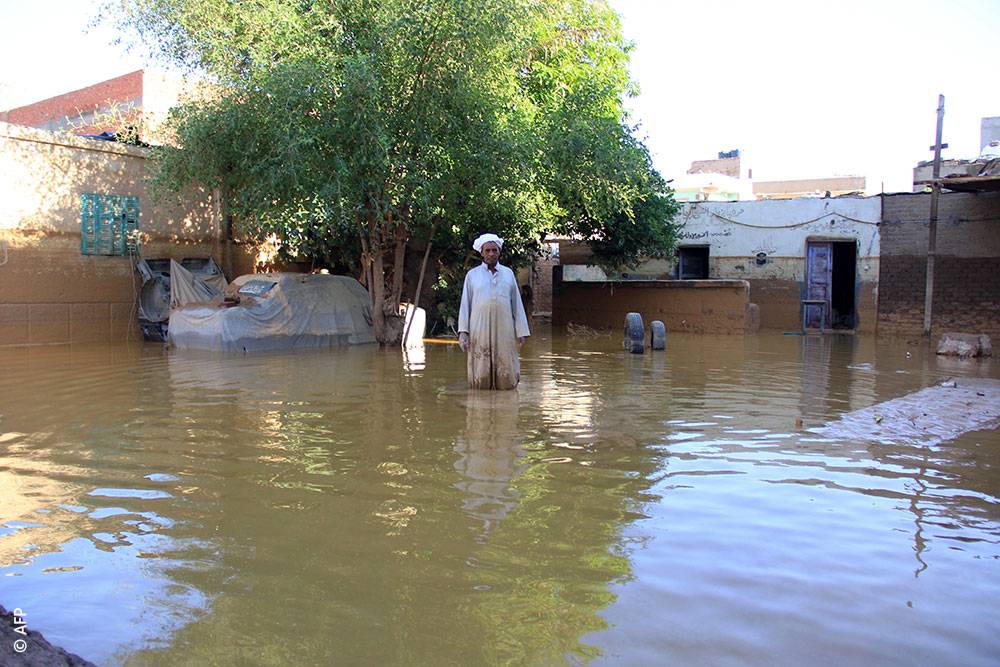 Climate Change Adaptation Manager at Egypt’s Ministry of Environment Saber Osman mentioned to Raseef22 that a guide for climate threats and dangers is being put together. It would measure the environmental impact of any new project and offer solutions to the rest of the cabinet, as well as the private sector. It would aid in picking sites for new construction on coasts, for example.

The ministry is also attempting to add a climate crisis chapter in Egypt’s environmental law. “There is nothing in the law that relates to climate change,” Osman stated. However, it would take no less than a year to amend the law.

Environmental researcher El Shanawany held that “environmentalists, economists, sociologists, and engineers need to act together because one thing is for sure: Egypt is no exemption from facing climate change and we can suffer from adverse economic impacts.''

“If we build the economy around the environment, we will become a great nation,” was Mansour’s final thought.