There are current discussions all over the net about the secularization of Mauritania, the rhetoric varies from those who welcome the idea, those who reject it and those who are indifferent while others believe that discussions are premature and are not a pressing issue, but rather should be for a later stage.

On February 17, 2017, activists launched the "We want a secular Mauritania" campaign, it did not appear to have leaders nor was it rehearsed, the campaign went viral in both Arabic and French using the hashtag #We_want_a_secular_Mauritania on Facebook and Twitter.

Moulay El Hassan, one of the activists of this movement, told Raseef 22: "The amount of interaction on the subject surprised everyone, including those who launched the campaign and the positive feedback was a surprise as thousands of citizens demanded the secularization of the state without knowing each other and without planning it, secularists discovered that there were others like them who had the same convictions, they were not alone.

While many have also attacked the campaign, it has revealed the presence of large numbers who want to secularize the state, and the international, Arab and local media were discussing the subject and interviewing activists.

"There were a lot of difficulties," Hassan said “Local television interviewed activists but did not broadcast fearing the lash of a conservative society that confuses secularism with atheism in the campaign”.

The activism of the campaign did not remain virtual. On July 2, 2018, a demonstration was held in Nouakchott, where protestors held up signs saying "We want a secular Mauritania", amid great apprehension over the negative view of secularism amongst the majority of Mauritanians. 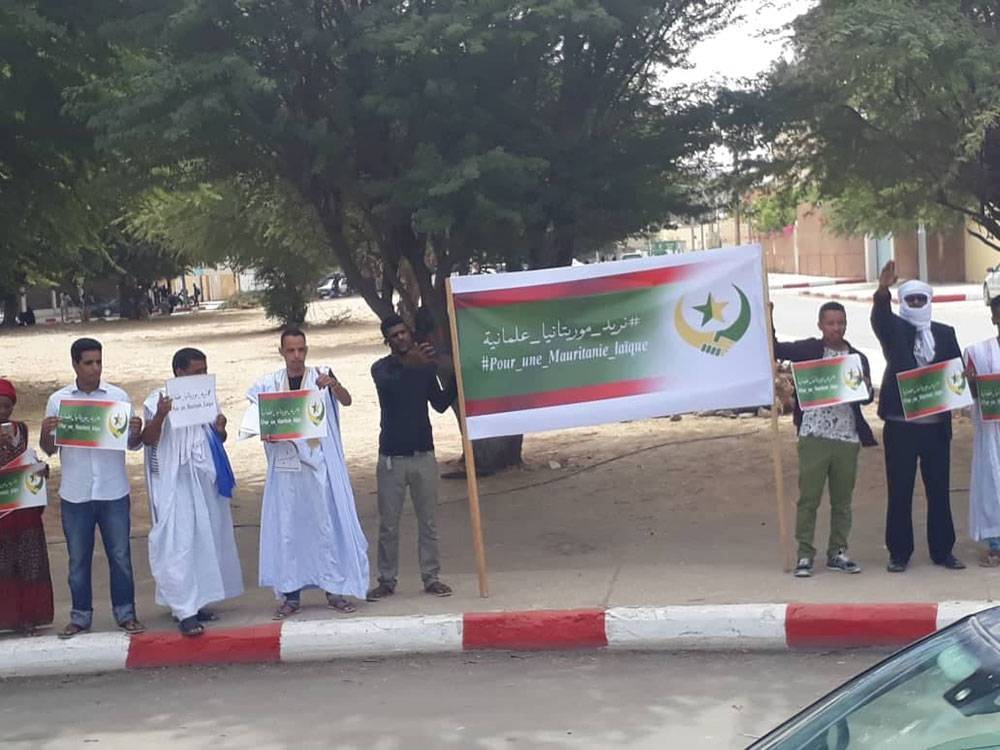 The "Secular Mauritania Movement", which was founded after the success of the "We want a secular Mauritania" campaign, has created a YouTube channel that publishes videos explaining secularism and the demands of Mauritanian secularists, it also published mobilization videos on Facebook.

He adds: "We know our society, we have come from it and studied it, and we know what suits it, especially as we are diverse and represent all strata of the Mauritanian people. Our priority is administrative secularism, meaning a separation between government institutions and religious institutions, so all authorities will be forbidden from utilizing religion in any form.”

"Legislative, executive and judicial authorities must be civil, and their sole aim should be to achieve justice among citizens, a justice unrelated to religion, in any way.”

Mauritanian secularists do not consider their state to be theocratic but they criticize the regime's use of religion for political ends, and see secularism as an essential component for upholding human rights.

Mauritania's Article 306 states "every Muslim who mocks or insults Allah or His Messenger, peace be upon him, or his angels or books or one of his prophets is to be killed without question, even if they repent, they must still be punished by death"

"As for religious institutions, it is not our goal to eliminate them or for them disappear, but we aspire to enable them to focus on the religious concerns of citizens without having any role in politics”. He gives the example of the association of Mauritanian Imams that he believes should “have no political opinion nor support one political candidate or stand against another nor in the debates of the parliament or the judiciary, and have no guardianship of citizens."

Mauritanian secularists do not consider their state to be theocratic but they criticize the regime's use of religion for political ends, and see secularism as an essential component for upholding human rights.

"The Mauritanian state does not guarantee freedom of belief," Hassan said. He refers to article 306 of the Mauritanian Penal Code, which he describes as "most dangerous and only suitable for IS," as he recounts the shortcomings of some articles of the constitution that restrict some functions to Muslims, such as the presidency of the republic. He comments “Of course our problem is not with religion itself but with these articles.”

The new version of Article 306 states that "every Muslim male or female who mocks or insults Allah or His Messenger, peace be upon him or his angels or books or one of his prophets is to be killed without question, even if they repent, they must still be punished by death.” “Every Muslim who abstains from prayers while admitting that they are obligatory will be forced to do them till the last prostration and if they continue to abstain they will be sentenced to death.”

He recalled what happened in 2017 after the Maliki doctrine was selected as the main school of jurisprudence for the state saying "The state should not have a doctrine or religion, we stand with the right of every person to have any faith”.

Many Mauritanians have criticized the "We want a secular Mauritania” campaign and some consider it to be superficial and naive.

Researcher Ahmed Salem Ould Abidine told Raseef22: "There is a call for secularization but let's look at those calling for it, they are a tiny minority but they have a strong media presence on all platforms, so those not in the know would be under the impression that they are many, in addition, the majority of them are young people who are at most in their early thirties, with weak academic formation, they have not read much about the philosophy of secularism and the historical conditions that were behind its spread in the West.”

In his critique of the movement, Ould Abdin focuses on criticizing the backgrounds of its supporters. He says that some of them "knew only secular things that were broadcast by the media or simplistic writings," While others see in the movement “an opportunity to fulfil their desires and those are usually people from a poor socio-economic background the problem that he does not understand the reality of secularism or the truth of religion." He adds that there is a third kind of person in the movement who is only seeking social media fame and a fourth kind “who did not receive correct religious training in their youth and does not understand the truth about secularism or the truth about religion.”

In his view, "the real problem is in the latter type, which does not differentiate between very divergent concepts such as secularism, science, good political governance and other concepts that at first sight seem to be related to secularism, whereas really these are universal concepts and can be pursued without secularism”.

The Mauritanian researcher talked about how some young people incorrectly link between secularism and unrelated things, such as thinking that it will save them from poverty, exclusion, marginalization and unemployment, noting that the majority of secularists are not fully aware of the specificities of Mauritanian society.

The Debate Is Not New

The debate on secularism in Mauritania is not new. "These claims began with the new millennium when a new generation of activists emerged," said Abbas Abraham. "Attention was paid to the political use of religion either in justifying tyranny or in creating false consciousness. Anti-clerical language begun to appear among many starting with “the conscience and resistance” movement and spreading among jurists, bloggers and opinion writers.

"Conscience and Resistance" is a left-wing organization that switched from covert activism to becoming a public movement in 2007 while IRA (Initiative for the Resurgence for the Abolitionist Movement) was formed in 2008 to fight slavery in Mauritania.

But according to Abraham what is new about “We want a secular Mauritania” is that secular demands have become separate from other demands and flipped the discussion into one about identity and as a result, the conversation is superficial, utopian and dreamy.

In his view, "neither secularism nor secularization come from the state, but from historical lifestyles and schisms from religious reform within religious groups themselves, in short, it's not part of a political program but a deeper historical progression.

Secular debates included whether or not the Mauritanian people would accept secularism or not, there were those who deemed it impossible since the society was founded on values that rejected secularism completely and others who considered Mauritanian society fundamentally secular especially the Bidhani people.

The Bidhan identify as Arabs in Mauritania, some are of Arab origin and some of Berber origin but Arabized, speaking the Hassani dialect, a dialect close to Arabic, they are of various social standing.

According to Abbas Ibrahim "Unlike most Muslim countries, before colonialism Islamic law, particularly outside Family Law, did not play a major role in the Sahrawi context and even less so in the Sudanese,"

He added: "In fact, the French colonialism, which defeated the warring tribes, became an enabler of the religious tribes, launched Islamic institutions that had been oppressed before colonialism, like the judiciary and the “peoples” law which was derived from both shariaa and custom.

He added: "There was almost no nostalgia for the state sponosred religion before two events: the few demonstrations held in the 80’s which paved the way for the regime of President Mohamed Khouna Ould Haidala (1980-1984) to hastily implement a criminal system referred to as Sharia. The second is the “Al Nusra” movement which was founded in 2014 and which called for a limited application of Sharia law and specifically in the incident of Mohamed Cheikh Ould Amkhitir.

He continued: "With the exception of the calls of the Salafi movements and the movement of 'no promiscuity' (founded in 2012 which demanded the blocking of pornographic sites in Mauritania to counter what they called “pornographic phenomena”) to apply the Sharia, but the calls by Islamic leader, Othman Ould Aboul Maali for the application of Sharia in criminal cases were not popular even amongst the Muslim Brothers.

However, Ould Abdeen believes that "Mauritania does not need secularism, and even if we assume that a political system has forced society and the state to adopt a secular system, it will not succeed because of the nature of society and the power of religion rooted in its subconscious and in the public and private life of individuals."

Harassment of All Kinds

Activists in the secular Mauritania movement complain of harassment of all kinds. "Those who demand secularism in Mauritania are subjected to a lot of harassment by their relatives, they are denied work, pressuring them to abandon their position" says Moulay Hassan. Women who adopt secular thoughts are slandered. Their honour is questioned which causes many to lose their enthusiasm for the movement.

He stresses that when the secular movement began in 2017, thousands of people participated on Facebook, but after a while, only a few stuck the course.

Secularists have been subjected to many threats, especially by the Islamists, who "regularly release a list with the names of secularists, calling them atheists," according to Hassan.

Some secularists are surprised by the attitudes of Mauritania’s elites towards their demands, often standing against them. "We are a society with so much hypocrisy," said Moulay Hassan. "It is a strange sort of hypocrisy, when you find someone with a certain ideological background but defends something that contradicts his convictions”.

"There are people we know that are very secular, but they are aggressively attacking secularism, and I don't know why? Perhaps for political reasons."

To The First Woman I Loved, Beirut