The name Bahrain has always invoked an image of a society that is more permissive culturally and socially than the rest of the Gulf. It is also a country that has not prohibited alcohol for a significant part of its history although alcohol was never manufactured locally but rather bought in from India, Iraq and Iran in the days it was a British colonial protectorate (1899-1971) as well as when the Portuguese dominated the Arabian Gulf (1521-1602)  However, this does not preclude, according to various historical writings, that alcohol existed in Bahrain prior to the European presence through trade, shipping and even local production mostly of date liqueur, from the date presses or historical “madabes” that go back to the ancient Dilmun era in Bahrain. There are several intact presses which are now archaeological sites one of which is the famous Qalat Bahrain or Bahrain Fort, a UNESCO world heritage site. Dilmun’s history stretches back to 2800 BC

On September 20, 2019, the government decided to significantly reduce the duty on spirits in Bahrain from 225% to 125%, or by half, which encompasses types of spirits including wines, wine, beer and others.

The application of this tax on alcohol has been delayed at the request of suppliers until their inventory is sold out.  While the price increase for cigarettes and soft drinks began on December 30, 2018. 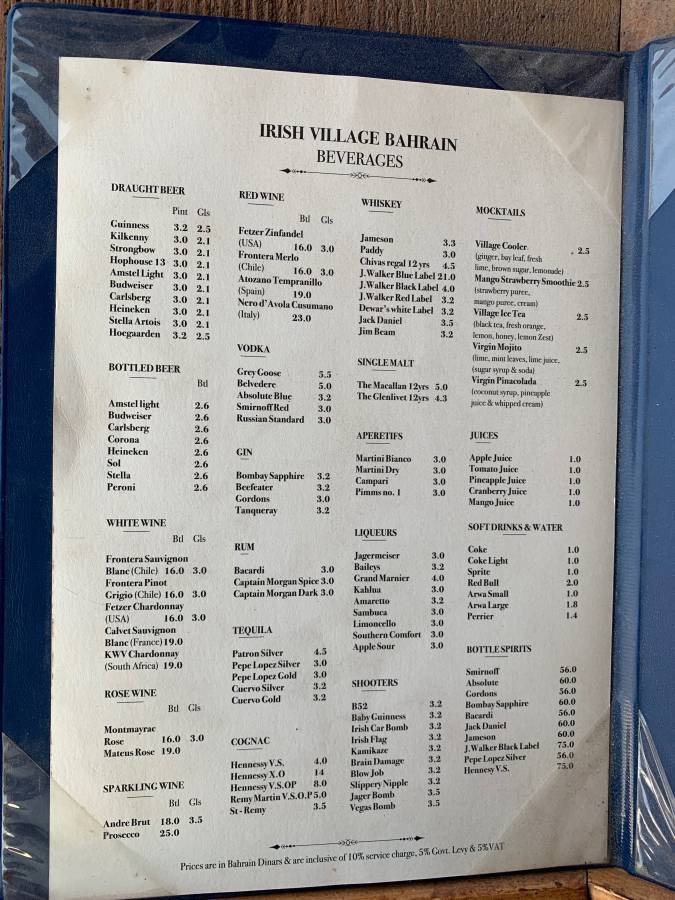 Bahrain is one of the few countries in the Gulf in which the sale and import of alcohol are authorized. But in return, it imposes high taxes on its import. In February 2016, the Bahrain Ports Authority decided to raise the value of the customs tax on alcohol to 225% from 125% then reverted to the original tax due to the complaints restaurant owners and five-star hotels about how this rise in price was discouraging people from drinking in bars and restaurants. Bahrain, because of its social, ethnic, sectarian and religious diversity, has been and continues to be a hub for bars and brothels in the Gulf region, through the law that regulated and licensed both dates from the time of British Chancellor Charles Belgrave, who enjoyed considerable influence in Bahrain and played a major role in its development over thirty years.

Apart from Dates Liqueur, Bahrain does not produce any of the alcoholic drinks freely available for sale, in stark contrast with its GCC neighbours. It has not prohibited alcohol for a significant part of its history.

Belgrave served as an adviser to the rulers of Bahrain from 1926-1967 until he was forced to leave the country. At that time there were offices of colonial subdivisions in every Gulf state (known as Persian Gulf residencies) to administrate British protectorates; it answered to the India Office in London. The chancellor was not officially affiliated with the residencies but was an independent financial advisor to the rulers of Bahrain but through the sheer force of his personality he came to have the final say in all aspects and branches of the Bahraini state, even the judiciary After India's independence in 1947  the responsibilities for the residency and the protectorates were transferred to the British Foreign Office.

Today prostitution occurs under the radar despite the Bahraini governments' commitment to combatting these practices through laws against human trafficking.

The Village of Justice

So what is the story of the Adilya district,  where the British lived, it houses the US embassy building and the residence of the Kuwaiti ambassador (which was restored and built again) and that of the British Council Director and is now home to many restaurants and bars?

This neighbourhood, formerly known as "Zalmabad", the original name of Adlieh, was changed to "Adlieh" in the era of British Chancellor Belgrave, who wrote in his diary about the origins of this name: “Wednesday 20th March:  The cook is such a very messy fellow, a Persian, he lives in squalor. They call it Thulmabad meaning the village of oppression but the official name is Adilabad, the village of justice”

Another stand out in the neighbourhood was the gallery “Al Riwaq” which unfortunately closed its doors this year, creating a gap in the cultural scene as it used to provide a space for everything from youth troupes, street music, graffiti which complemented the programs by the Tourism Authority and the private sector like the yearly Food festival and the block 338 market which is held twice a year once in Spring and another time in winter. 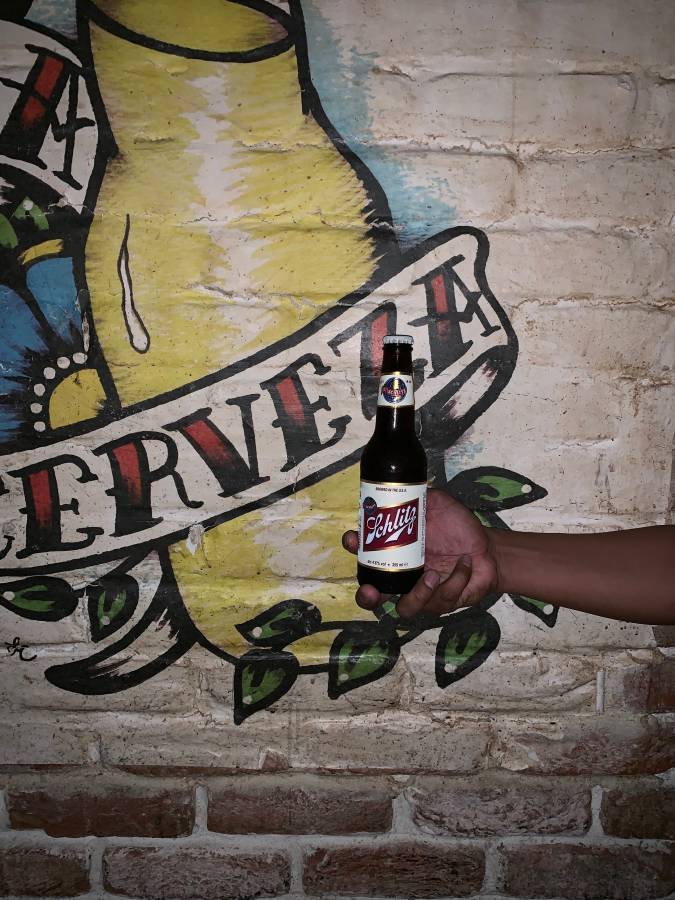 Although Adliya is an upper-class neighbourhood where ministers and the wealthy live, nestled between the villas there are numerous restaurants with parking lots. Rooftop lounges like Hazel and Calexico and street-level bars like Irish Village. Chapter1, Castro, Gallery21, not to mention the many sports bars.

Hazel is one of the most popular bars for Bahraini youth, with weekly stand comedy shows, concerts with local musicians One of the best known today being Esraa J. You have to book in advance through social media not just drop in like other bars.

Bars and liquor stores with official licenses in Bahrain were few in the 1970s and 1980s such as Up Stairs Down Stairs, which is still open in Adliya today. 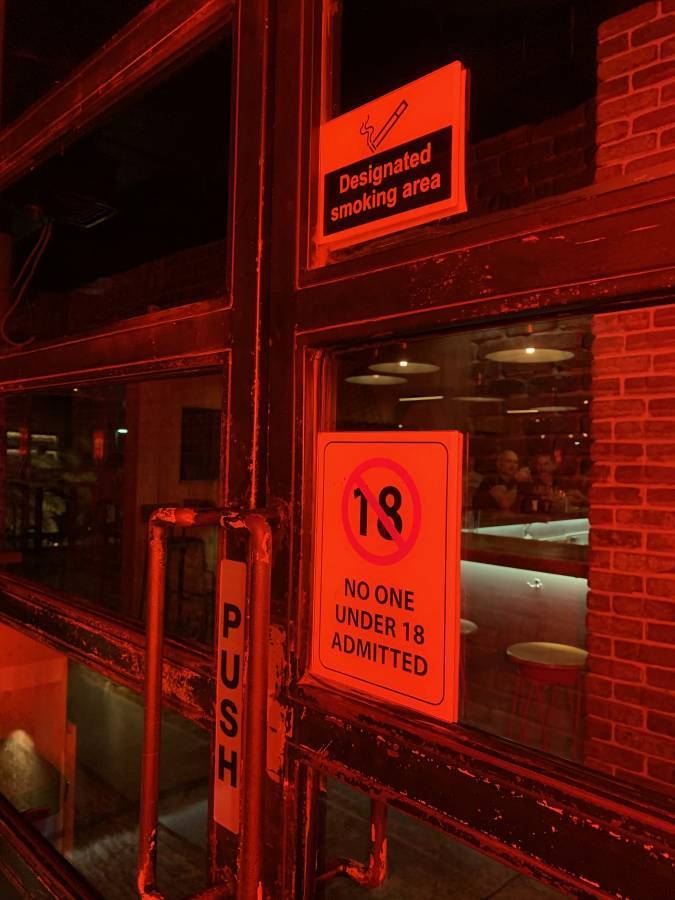 Hassan Al-Ali, a longstanding patron of bars spoke with Raseef22 “I’m now 66 years old, I go to Raghbi club in Sar (North West of Bahrain), I have so many memories of bars in Bahrain, especially in Manama, there were a few places where I would get supplies for end of week parties and barbecues  in our homes or in our cottage by the sea on Jazaer beach (South Bahrain)

Al-Ali added “Now things have changed with the tourism policy in Bahrain. Now in every part of the capital and the suburbs you can find alcohol or bars or restaurants that serve every kind of wine, the cost of a bottle starts at 100 dollars, whereas you can buy it at half the price in licensed spirits shops, the prices are very exaggerated.”

"Some bars have disappeared completely, such as the Bristol Hotel pub and Omar Khayyam pub (under renovation), while the five-star hotel bars remained, the most famous pubs are The Sherlock Holmes, the British Club and the Irish pubs still exist or are being renovated with the new tourism policy."

In spite of this social openness, the Gulf island is still suffering from political repression, limited freedom of opinion and expression  and high unemployment rates, especially among university graduates, leading to reduced consumption, and less Foreign investment. This has also affected the expansion of tourism for foreigners and residents especially in the Maared Street area, close to the headquarters of the United States fifth fleet which falunts cheap eateries and discos.

Bahrain is notorious for its fast pace, from its nature and its position as an important commercial and financial centre, but this has not prevented it from celebrating its diverse culture and history and its interest in developing and supporting various arts.

Adliya is an important culture and recreational hub for Bahrainis, residents and visitors from neighbouring countries especially Saudis, and all signs indicate it will continue to play that role, it remains an investment opportunity worthy of consideration to real estate developers that want to invest in Bahrain.