When she was 18, Maria escaped from her father’s house after he beat her so violently that she lost consciousness, then restrained her for two weeks with metal chains that stretched from her bed to the bathroom. “He wanted to beat the woman out of me,” Maria said. Six years later, she is still fighting to survive.

Over the past year, I interviewed 50 transgender women about what it was like to live and survive in Lebanon. They face structural violence and discrimination in every aspect of their lives—at home, in the street, in seeking jobs, housing, and health care, and at Lebanon’s ubiquitous security checkpoints. All the women I spoke with said it is nearly impossible for them to live a safe and dignified life in Lebanon.

For many of the transgender women I interviewed, coming to terms with their gender identity in a patriarchal society is a tormenting process. They are often forced to make a choice: Being themselves publicly and paying the price for visibility, without any government protection, or suffering through excruciating self-censorship.

Maria said that after she fled her abusive father, she decided to live her truth as a woman, but her ID still said she was male. Following countless rejections from would-be employers due to the ID mismatch, Maria finally found a job at a hair salon that barely allowed her to make ends meet. Soon after, her boss told her that her appearance was becoming “too girly,” and fired her. She hasn’t worked since.

When she tried to find a place to stay, several landlords, after seeing her male ID, told her that her appearance was “too abnormal” and rejected her. Because Lebanon does not have anti-discrimination laws, there was little Maria could do.

"After my interview with Leila, she went into the bathroom, took off her polka dot dress, and put on a suit and tie. She slicked her hair back, felt the knot return to her throat, and walked out into the streets of Beirut as the man she is not".

"He wanted to beat the women out of me", Maria said... transgender women in Lebanon face structural violence and discrimination in every aspect of their lives

Without a job or shelter, Maria told me, she was left on the street, battling verbal abuse, sexual harassment, and physical violence. She could not turn to security forces for protection – she knew they would offer little support to a trans woman. Worse, every time she was stopped at a security checkpoint, police officers harassed her. On one occasion, when officers saw her male ID, they ridiculed her, made her strip down to her bra and underwear in the street, encouraged passers-by to insult her, and detained her overnight—simply for existing as a transgender woman in public. 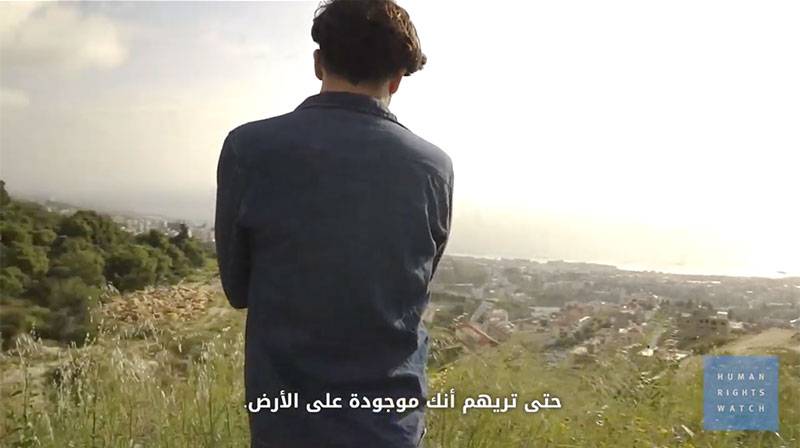 In Lebanon, transgender people can only change their names and gender markers on official documents through a court ruling, often following a “gender dysphoria” diagnosis and surgery, which is expensive (up to $70,000) and sometimes unwanted. Many transgender women, like Maria, are also deterred from seeking rulings due to high fees, lack of legal assistance, and protracted court proceedings.

“We have to force ourselves to walk and talk and dress according to society just so we don’t get beaten by whoever was in a bad mood that day”.

“We have to force ourselves to walk and talk and dress according to society just so we don’t get beaten by whoever was in a bad mood that day” Maria told me, “We have to sacrifice our whole being. I’m not trying to provoke them, it’s just who I am.”

Leila, a 34-year-old Lebanese trans woman with a degree in information technology, told me that she suppresses her identity to survive her daily life. She said she doesn’t feel safe being herself in Lebanon, and that she has been “hiding Leila” until she finds a way to leave the country.

The only place Leila feels safe is at the community center of a Lebanese organization that defends LGBT rights. I interviewed her at the center, where she was able to dress and express herself in accordance with her gender identity.

Lebanon has an obligation to end the structural violence and discrimination against transgender women. The Lebanese government should enact legislation protecting against all forms of discrimination, including on the grounds of gender identity, and establish a simple, administrative process allowing transgender people to change their names and gender markers on their identity documents based on self-declaration.

The web of violence spun for transgender women under Lebanon’s social structure haunts them throughout their lives. When they are denied housing, employment, health care, and the ability to report discrimination, they have nowhere to go. When they cannot possess identification documents that reflect their identity, they are systemically marginalized, and their existence is denied.

After my interview with Leila, she went into the bathroom, took off her polka dot dress, and put on a suit and tie. She slicked her hair back, felt the knot return to her throat, and walked out into the streets of Beirut as the man she is not.

Sick or Bewitched: the Life of Three Homosexuals in Idlib, Syria

On a Random Check, My Mobile Phone Outed Me: A Story on Homophobia in Libya