"The enemy of my enemy is my friend," with France and Britain occupying the Muslim world, from Indonesia to Algeria, it was not surprising that the people and leaders of the region were sympathetic to the rise of Nazi Germany. Germany, in turn, sought to contact Arab and Muslim rulers and activists, in the context of its international conflict with Britain and France starting with the Franco-German War (1870-1871) through the First and Second World Wars. When the Kaisers of Germany and the Ottoman Empire were brought together and fought together in World War I, a rumour spread that the Kaiser Wilhelm II, the Emperor of Germany, was a secret Muslim, acquiring the moniker” Hajj Ghalium” among the Arab public. A few years later, Nazi propaganda in Muslim countries broadcast that Hitler had secretly converted to Islam and became known as Hajj Mohamed Hitler, as mentioned in the book "The Third Reich and the Levant" by the Polish historian Lukaz Herzós, and translated into Arabic by the National Center for Translation in Egypt to "Hitler's Germany and the Levant." The aim was to attract Arab and Muslim countries to the German agenda but Germany could not benefit from their support in World War I, which ended with the surrender of Berlin and the division and collapse of the German Empire. German contacts with Arab rulers and activists began in 1930 before Hitler came to power in 1933, but as the Nazi era began relations developed in an unprecedented way according to the previous source.

The Mufti of Palestine and Hitler 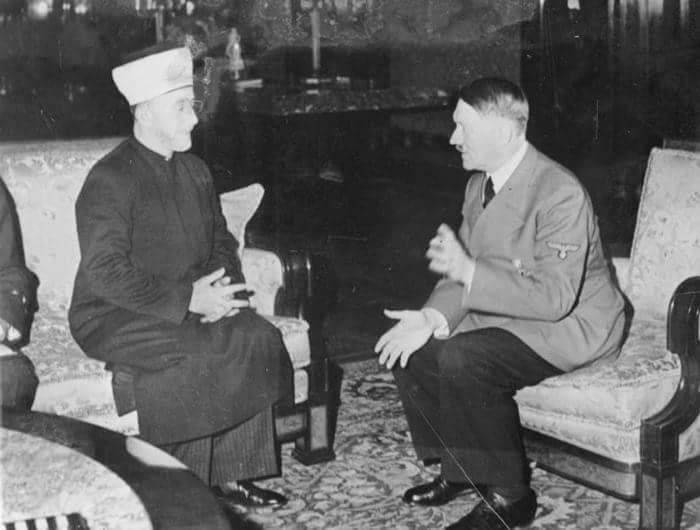 It can be argued that the spiritual father of Arab-Islamic relations with Nazi Germany was Sheikh Amin al-Husseini, the Grand Mufti of Jerusalem, at the time the most prominent Palestinian leader. The German historian Klaus Gensicke writes in his book “Nazis and the Mufti of Jerusalem” that Amin al-Husseini was the progenitor of Nazi-Arab relations, that contacts between Hitler and Husseini began in 1933, and Husseini initiated secret correspondence between Hitler and a number of Arab leaders. 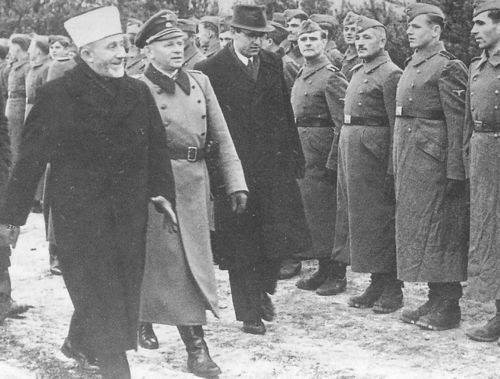 The historian explains that Hitler supported the Great Palestinian Revolution (1936-1939) in order to provoke unrest in the British colony in the hope that the unrest would spread throughout the Arab region. Writer and historian Rizkallah Boutros, who first presented these secret Nazi documents to the Arab world in a book "The Arab World in German Secret Documents 1937-1941",  which reveals through German foreign correspondence that Berlin was indeed against the idea of ​​a Jewish state in Palestine, and believed that the Jewish colonies In Palestine should not have a unified administration, but it must remain separate as municipalities or small towns with a Jewish majority without forming a state among themselves, because such a state would become an extraordinary boost to "political Judaism," which was an unacceptable idea. These documents reveal that when Nazi Germany allowed German Jews to immigrate to Palestine it continued to monitor their activities and was opposed to the merging of the German Jewish colonies in the zionist entity that was to be announced and if it did happen and Britain announced the creation of the state of Israel, German Jewish colonies would not be allowed to be part of the state.

In the meantime, demonstrations were taking place in the streets of Egypt against the British occupation, with the slogan "forward, Rommel" in reference to the German commander Erwin Rommel, who led the German army to defeat the British in Libya and then stormed Egyptian territory in the famous battle of El Alamein. The Egyptian popular passion towards Nazi Germany was accompanied by a royal and elitist passion. In his book "How the monarchy fell in Egypt- Farouk the beginning and the end," the Egyptian historian Mohamed Ouda documented the indirect contact between Hitler and Farouk, under which it was agreed that the Egyptian monarch would provide logistical and political services to German forces if they succeeded in defeating the British army for a smooth crossing of the Nile Valley to The Suez Canal and then the oil sources in the Gulf and Iran.

As the Nazi era began in the early 30s relations developed in an unprecedented way:  In an effort to weaken the French and British in the region, Nazi propaganda in Muslim countries broadcast that Hitler had secretly converted to Islam and became known as Hajj Mohamed Hitler.

Fearing Political Judaism, Berlin was against the idea of ​​a Jewish state in Palestine, and believed that the Jewish colonies In Palestine should not have a unified administration,

After Hitler's defeat and suicide, King Farouk mourned and retired from the palace and considered abdicating the throne because the strong European opponent of occupying Britain had been silenced.

After Hitler's defeat and suicide, Farouk mourned and retired from the palace for a while and considered the idea of ​​stepping down from the throne after believing that the strong European voice against Britain had been silenced. The Germans made contact with a number of the Egyptian political elite such as General Aziz al-Masri, the spiritual father of the Free Officers Organization. Al-Masri was supposed to lead military efforts upon Rommel's arrival in Cairo to control the military performance of troops landing in Egypt for the first time along with the shrewd politician Ali Maher, the former prime minister, who is considered one of the most important figures who held sway over the political game in Egypt in the period before July 1952, There were also reports of the formation of Nazi military cells which included then  Egyptian army officer Mohamed Anwar Sadat according to the book "Sadat ... the truth The Legend "by journalist Moussa Sabri. The former Minister of Culture. Mohamed Saber Arab describes in his book "Attack on the Royal Palace -The Incident of February 4, 1942" that when Britain sent a convoy of tanks to besiege Abdeen Palace, and its ambassador ordered Farouk to allow Mustafa al-Nahas, head of the Wafd Party, to form a cabinet or step down, The British were aware of Farouk’s German leanings and that Hussein Sari’s ministry was just a puppet in his hand. The British demand for Al Nahas to be prime minister was because of British relations with Al Nahas who had assurances from the leader of the Al Wafd to keep Egypt within the British sphere of influence and out of Nazi Germany’ sphere of influence.

Our generation today may be unaware that Syria and Lebanon came under German rule between 1940 and 1941, when the French Mandate authorities in Damascus and Beirut declared allegiance to the Vichy government, a German-made Fench government that ruled parts of France after the German-Italian occupation of the Third French Republic in 1940. The Vichy government had little political independence from the German high command. In 1941, Germany appointed through French Mandate Khaled al-Azm as President of Syria, and Alfred George Nakkash as President of Lebanon. Britain then decided to launch a military campaign against the Levant in order to expel the French forces loyal to Germany, and indeed Britain entered Damascus on June 24, 1941, and Beirut on July 15, 1941. The rulers of Syria and Lebanon had been chosen due to Nazi approval or else the mandate would have chosen others to take their place.

In Iraq, Germany secretly communicated with King Ghazi before Hitler or Ghazi came to power, both of whom came to power in 1933. When King Faisal I died, and given the German sympathies of Crown Prince Ghazi, Britain's first man in Iraq, Nuri al-Said, tried to crown Zaid bin al-Hussein the brother of the monarch. The late Prime Minister Rashid al-Kilani, however, led a constitutional process to name Ghazi King, according to Iraqi historian Hamid al-Hamdani in his book "The History of Modern Iraq - Book I". Baghdad was suffering from the British occupation, and Germany sent to the king a radio station with advanced German technology installed it in Qasr Al Waed and dedicated its broadcast to attacking Britain and propaganda for Germany. On the morning of April 5, 1939, the Iraqi people were surprised by an official statement announcing the death of King Ghazi in a car accident near one of the presidential palaces. The Iraqi people were not ignorant of the King's attempts to liberate them from the British occupation. A popular uprising erupted and protesters killed the British Consul in Mosul after storming the Consulate. In the 1970s, Dr Saeb Shawkat, the pioneer of Iraqi surgery, revealed in his famous article “This was the beginning” that his medical examination showed that the king died due to a sharp blow to his head. Thus, Britain got rid of its young rival and Nazi sympathizer. It was decided to appoint the child Faisal II as King of the country with Prince Abdul Ilah Ben Ali appointed as regent of the throne, which means t he became the actual king of the country. 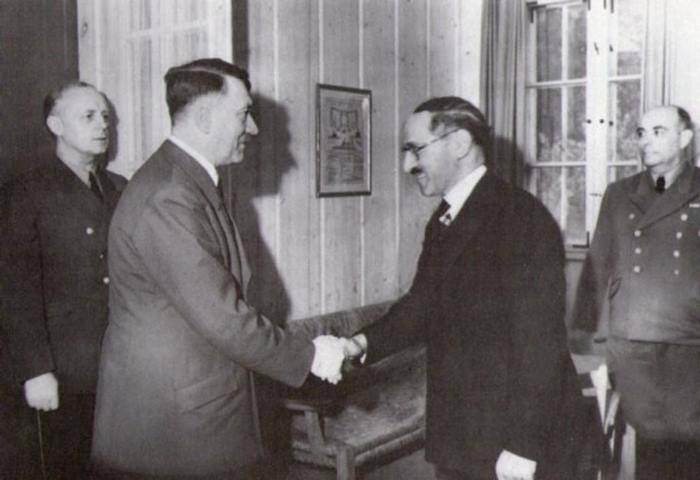 In 1940, Hitler sent Sheikh Amin al-Husseini to Iraq, opening the door for secret negotiations between Berlin and Prime Minister Rashid al-Kilani, and the latter had a lobby within the army called organization of the four colonels. According to the historian al-Hamdani, Britain forced Kilani to resign, but the new ministry tried to declaw the four colonels. Here, a military coup took place on April 1, 1941, Rashid Ali al-Kilani was appointed prime minister, ousted Abdul Ilah bin Ali from the emirate, and Prince Sharaf bin Rajeh, the former ruler of Taif (the last Taif emir of the Hashemite family), was appointed as regent. British Ambassador Cornelius sent a telegram to  the British Prime Minister Winston Churchill, saying: "Either you send an army to Iraq or wait to see the country in the hands of the Germans." The German enthusiasm about the April 1941 coup was evident. Britain sent an army from India as well as the Jewish Legion, young Zionists from Europe who fought with the Allies, and the Arab Legion, the army of Jordan under British administration. British nationals were evacuated from the country  and currency smuggled from banks by the British and their loyalists

The British carried out a war raid on a military base next to Lake Habbaniyah on 2 May 1941 and the Kilani government responded formally by seeking help from Nazi Germany. And on 18 May 1941 Germany sent an aerial military mission of five warplanes, as well as tons of weapons through Syria, which was under the control of the Vichy government, Kilani announced the withdrawal from the British Sterling area. But the British military advance was faster than German aid. When the British became close to Baghdad, Rashid Ali al-Kilani, Amin al-Husseini, and Sharaf bin Rajeh fled the country on May 29, 1941, bringing Abd al-Ilah back to the throne of Iraq on June 1, 1941, and the revolution fell through.