For Palestinians in the Gaza strip, going to coffee shops and smoking shisha was limited to young men but this is no longer the case, cafes have also become a destination for girls as a form of emancipation, entertainment, recreation, escape from the siege and for just chit-chat.

It is no secret that Gazan society is conservative but recently it has become somewhat more receptive to this idea recently, especially after the increase in the number of cafes, resorts, beachfront restaurants both by the sea, downtown and in residential neighborhoods.

Gym in the Morning and Shisha in the Evening" 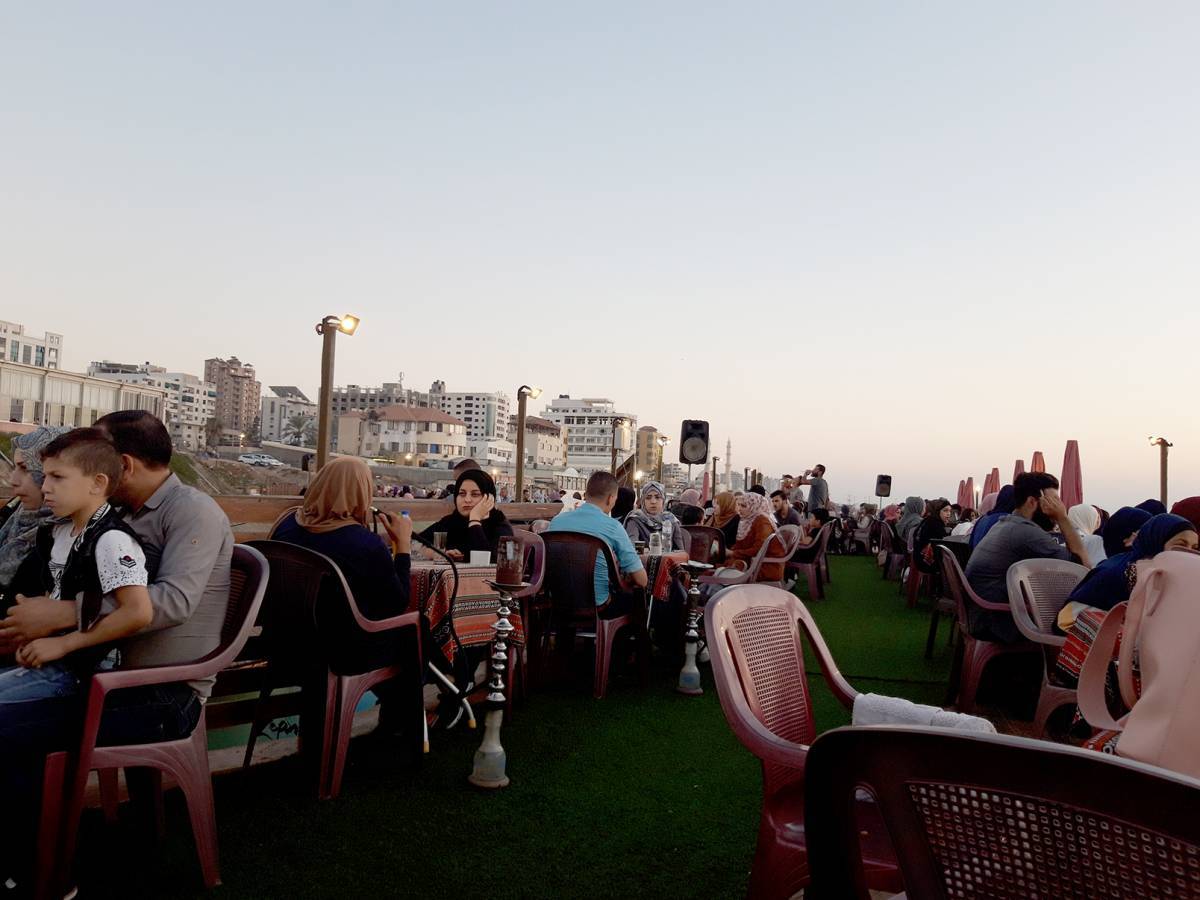 Three sisters sit in one of the classical luxury restaurants of Gaza which is located on residential building rooftop. The sound of the shisha bubbling mingles with that of an Israeli reconnaissance plane “El Zanana” or the whiner as the Gazans call it, it is rarely out of the city’s sky and dives down, coming quite close to them sometimes.

One of the sisters, Lina Saleh, 28, a graduate of the commerce department, used to visit the restaurant almost daily, especially in the summer. She tells Raseef22 “We have a lot of free time in Gaza and suffer from boredom, the result of the lack of job opportunities and instability, young people pay the highest price in Gaza, we waste our lives looking for work opportunities that don’t exist”.

Three months ago, Lina worked for a company but then her contract expired, she refuses to sit at home brooding, caught between the four walls, she would rather go to her favourite restaurant and hangout.

Lina adds: "Now I have plenty of time, trying in the morning to go to the gym, and the evening I go smoke hookah outside my home to relieve myself psychologically and get rid of negative energy, instead of dwelling on exhausting thoughts about unemployment and the crisis of the city and its worries, but there is always fear hovering amongst us when we are out   As long as there are Israeli planes flying overhead war could break out at any time”.

Lina says the restaurant is her refuge, she finds peace there because the other patrons are of her social class and they accept it as natural that she sits puffing at her hookah hose and nobody harasses her.

She also finds that hookah sessions provide her with an opportunity to form a community-based network that would help her find a good job, having completed her university degree in business administration three years ago.

Moving Away From Society

The cafes in Gaza take many forms, at classic cafes the price of a shisha exceeds 50 Shekels ($20), which is quite expensive for most people, Then there are more “Shaabi” or popular cafes Shisha usually costs 10 Shekels ($ 4) which is frequented by all classes and even entire families, and there are "Resto Cafe" which are of modern design whose clientele are usually young men and women and sometimes are limited only to young men.

In Gaza Strip, approximately 2 million people live in deteriorating social, psychological and lifestyle conditions due to the siege imposed since 2006. So they try to acclimatize and adapt to the circumstances of their city which is shut off from the rest of the world and find ways to vent after the most residents lost the right to mobility and to travel outside the country.

In Gaza Strip, approximately 2 million people live in deteriorating social, psychological and lifestyle conditions with the siege imposed since 2006. So, smoking Shisha could well be the best cure?

The girls of #Gaza live under a double siege: the Israeli siege on the borders and the constant reconnaissance drones on one hand and a cultural siege that frowns on many activities including smoking Shisha on the other

Ahlam Yousef, a 33-year-old employee of the Ramallah government, also finds that going to the cafes is an almost indispensable ritual she says, leaning against a table at one of the cafes in Gaza's Corniche beach, which residents see as their tourist destination. Also keeping her company is a book by Paulo Coehlo, Shisha in hand “I try to move away from society and live freely on my own, so I come constantly to the sea, as it is our only sanctuary & haven and of course I spend a great deal of time smoking shisha, it’s my method of overcoming the repression and societal pressures I must endure, it really became a habit since I lost my daughter 8 years ago and now I forgot all my memories of her”.

Ahlam tells her story, her narrative only disrupted by long and slow exhales of shisha, she says that she is separated from her husband. He took her then two-year-old daughter, went with her through the Gaza tunnels to Egypt and fled with her to Malaysia, and since then she has not seen her.

Ahlam sometimes thinks that her father might have told her daughter that her mother had died and so she tries to let go of her pain by sitting by the sea and to share her troubles with the waves.

Nidaa Said, a 27-year-old journalist who returned to Gaza from Cairo not long ago, believes that the Gaza Strip is completely different from Egypt's cities in terms of customs, traditions and freedoms, but sees the Gaza Strip as a fertile ground for rich & harmonious social relations among the population as they live in such close proximity to each other in a small city and everyone meets in the same places in this homogeneous society.

Nidaa is always keen to go out with her friends after work, heading to the popular cafes or restaurants for entertainment where they have “cosy” sessions dominated by the smoking of shisha where they always talk of their dreams, aspirations, the situation of the country, joke, and sometimes play cards.

Nidaa feels this is a good opportunity for self-entertainment while Gaza lacks other entertainment, such as cinema, trips or travel abroad to relax since this is impeded by the constant closure of the border crossings. 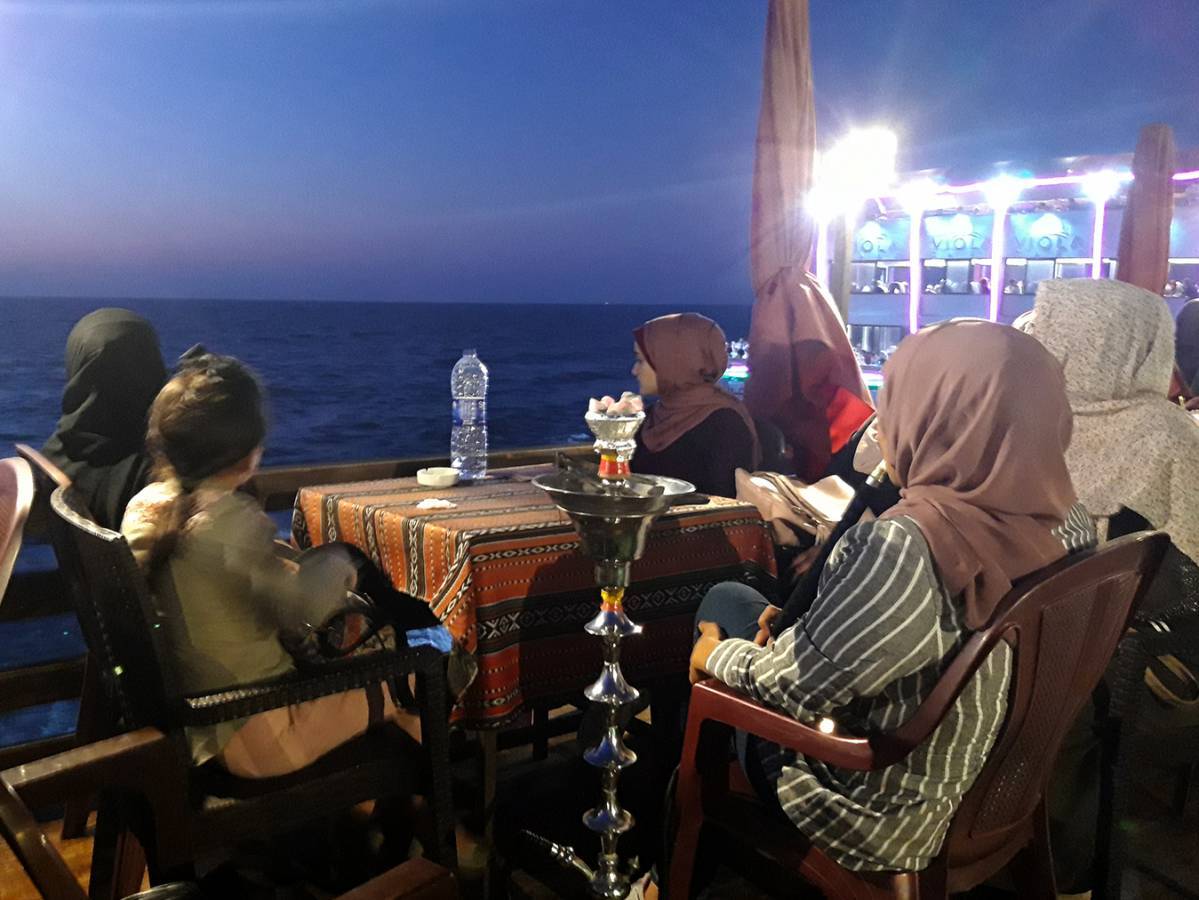 In 2010, the government of Gaza issued a decree banning the use of shishas by women in public places, as this is contrary to the customs and traditions of Gazan society but it seems that  this decree did not last long and caused controversy among the Palestinians of Gaza but still the local government imposes restrictions on the owners of cafes and restaurants, Shisha can only be served to those over the age of eighteen, and some cafes adhere to these rules.

Abu Roshdy owner of the Marina Café overlooking the Gaza Sea told Raseef22 that in recent years it has become increasingly noticeable that more girls are visiting cafes on their own  not only with their families which is a sign that it has become more socially acceptable.

Abu Roshdy adds that the reason for this is the circumstances of the siege, and perhaps the social pressure  and the siege forced people to accept this idea, especially since the cafes not only provide drinks, but there are Internet service and electricity, encouraging patrons to visit cafes to do their work, especially girls and young people who are self-employed, need a drink, to have a shisha while working, or watch matches, which girls often go to cheer on certain football clubs.

He also pointed out that this trend has become more common of late than when the Ramallah Authority ruled Gaza 13 years ago, though Gaza was more connected to the world  then and cafe patrons were mostly visiting tourists, also there were more sources of entertainment then unlike the current situation for Gazans.

The girls of Gaza live under a double siege and they are trying to get out of this bind and to find alternate ways of living although some disapprove of girls going to cafes and holding the shisha hose that is usually in the hands of men. But it seems that the girls are overcoming these looks of disapproval and holding on more tenaciously to their personal freedoms.

“One wife is enough”: Al Azhar Grand Imam calls for reform of polygamy