At the fuel-station roundabout in the centre of Deir Ezzor, you arrive at an important crossroads. Here, one needs to first take a moment to decide on their next destination, especially if they happened to be a tourist roaming the city for the first time in the hope of discovering its monuments and landmarks.

Will they head north towards the main street, a center of economic vibrancy, rich culture and heritage? Or do they head east towards the two commercial streets of Hassan al-Taha and the so-called Quarter-to-six, or even the historical Tekaya street, with its antiques and age-old artefacts, which lies in the same general direction?

They could always choose to go west towards the street of Cinema Fouad and the ‘garden of lovers’ – one of the most important gathering places for youth, friends and amorous couples.

All these options are viable and available in this city, which lies on the banks of the Euphrates in eastern Syria, a city replete with rich details that require a long time to discover. Amongst such discoveries is the spirit of the city and the temperament and culture of its people viewed from up-close; its streets and buildings with their various architectural patterns which paint a historical tapestry that goes back thousands of years before Christ; or the wide river basin accommodating houses on its edges; or the stories of the city’s people that they tell over and over to visitors. 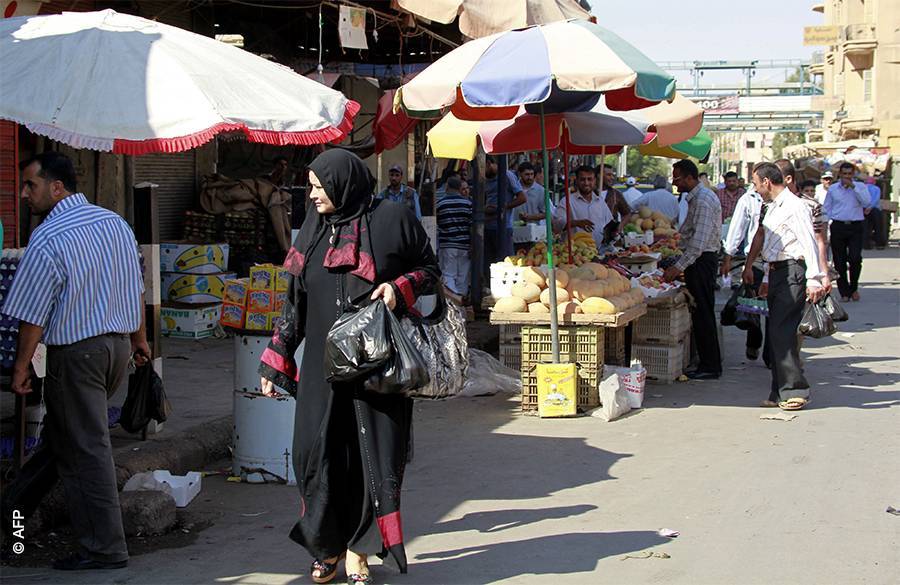 Such a description may appear somewhat strange for a city that has been mostly destroyed after long years of war. There are no tourists knocking on its door (or even thinking of coming to it), no tourists passing through its streets or sitting on the banks of its mournful river.

Yet the people of the “Deir” – as the region is termed – continue to frequent the fuel-station roundabout, that critical junction buried in destruction, looking right and left to choose their next destination. The locals are driven by a yearning to visit the special places of their destroyed city, wishing that they could go back in time, just a few years, to force an earlier end to the destruction. 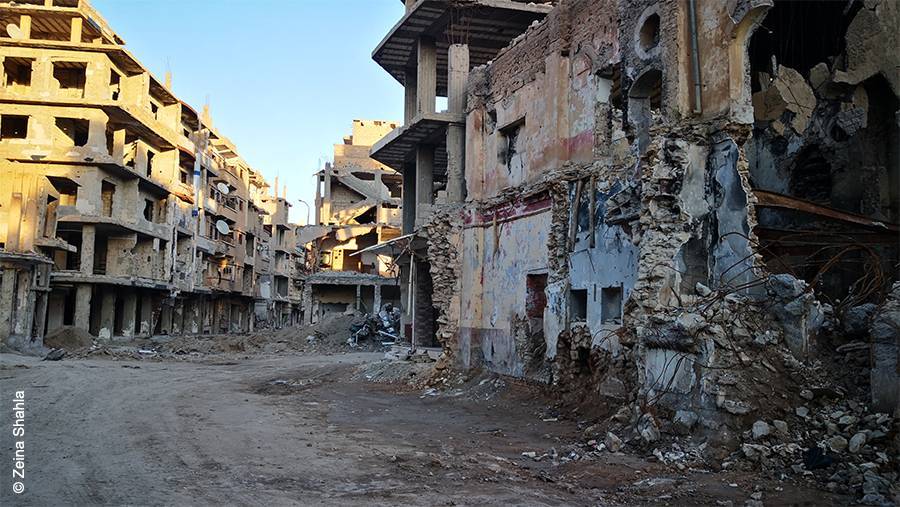 The “Cinema Fouad” street: memories that continue to survive amongst its stones

The Cinema Fouad street extends a few kilometres from the fuel-station roundabout to the Homoud al-'Abd square. One of Deir Ezzor’s most well-known streets, it accommodates hundreds of commercial outlets and cultural landmarks. In particular, the people of the city were once long-accustomed to frequenting its central monument: the Cinema Fouad, established in the middle of the twentieth century and located roughly in the middle of the street that bears its name.

“The Cinema Fouad street was the most important one for us, the most important without competition,” says Hadiya, a local we talked to who took us on a tour of the destroyed street, reminiscing about the dozens of details that existed once in every corner.

“Despite the cinema being closed for many long years, its name produces a very special effect in our hearts,” she adds. “If I could describe it in a few words, I would say that it represents friends and lovers, teenagers and young adults, cafés, florists and gift-shops. It is the street of our memories.”

Hadiya, who is in her fifties stops every now and then to point towards some storefronts.

“This is the clothes shop I used to buy clothes from for my children,” she says. “That is a large storage room for gifts, which always used to put in front of its door cars filled with toys and decorated with coloured ribbons.”

“Here on the first floor used to be a very beautiful cafeteria,” she says.

Yet Hadiya’s memory sometimes fails her, prompting her to ask herself aloud: “Is this the florist or ice-cream shop? What was its name? And the colour of its sign? The destruction erases all the details so that all the places look the same in their misery.” 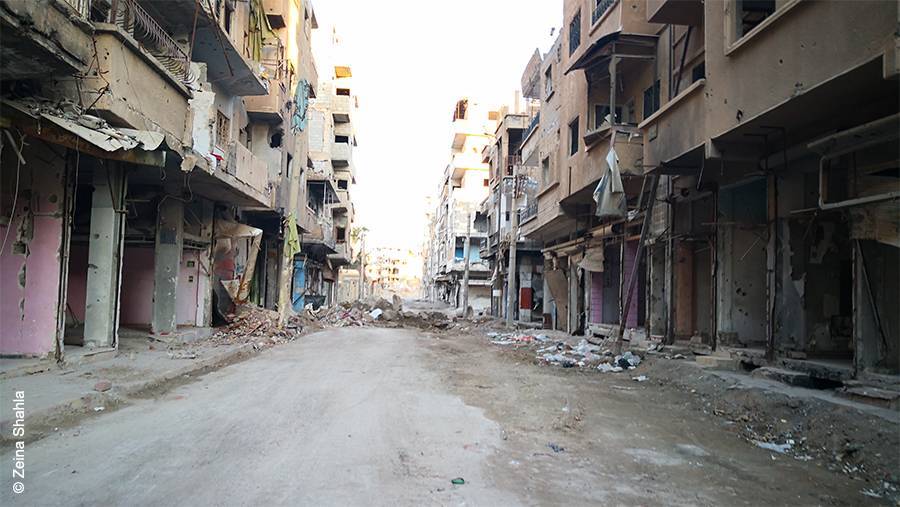 At this point Roua, another local in her forties, comes in to interrupt, pointing at a green broken window with pieces of wood dangling from it: “This is the house of a young man called Iyad. He used to like me once upon a time.”

“Every time I passed through the street he used to come out of his window and shout at me warning not to marry anyone else,” she said, smiling, before her expression changes. “Iyad died, and so did the house and street.”

Hadiya resumes her conversation as she tries hard to refresh her memories: “Look” she tells Roua, “In that house the first teacher in Deir Ezzor used to live, and her name was ‘Hedayat’. Everyone knew her from her loud voice. I think she is still alive but I don’t know anything about her.”

The memories and old laughs of my companions are interspersed by our careful steps on the broken stones. I feel as if I can hear the voice of Iyad while he calls out to his beloved flame from the window, the voice of Hedayat as she screams at her students, and the conversations and laughs of lovers as they filled all areas of the Cinema Fouad street. I look above to find collapsing rooftops, wondering who used to one day live underneath them – while walking besides emptied homes, pondering on the identities of those who used to reside within them.

Here, Abu Muhammad interrupts my train of conflicting thoughts, coming out of his house to see whose careful steps it was that chose to pass through this destroyed and largely empty street.

For his part, Abu Muhammad decided to fix his house and is now residing in it once again after long years of renting other homes.

“Nothing is better than home,” he says. “Home is dignity.” 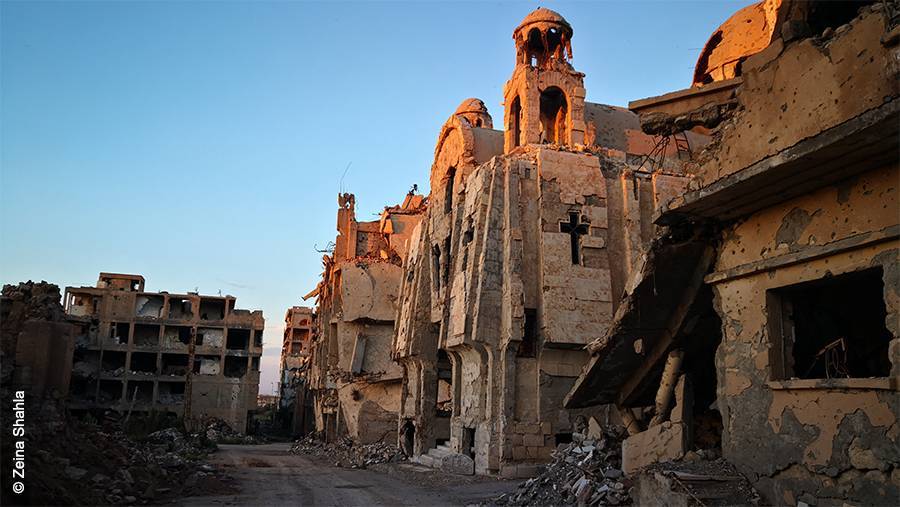 Jana, 25, is another who joins us as we stroll by her house in the middle of Cinema Fouad street. It is perhaps the third time that she comes to visit the remains of her memories here, failing to find any link between what she witnesses now and what she once did in the city she resided in during her childhood and teenage years – before fleeing with her family to Damascus in 2012.

“What is this place? Where am I? I don’t know,” she says, her voice catching. “But it certainly isn’t my house and it isn’t my street. I can’t believe that it’s my city either.”

Her sister Rama, 16, leaps along with her little brother across the rocks, searching for the memories that may have survived somewhere amidst the broken stone and rubble – intermittently letting out a shriek every now and then when they find a small piece of cloth or a paper from some book, only to then throw them away and look for something else.

Rama’s memories of the pre-war street are limited to periodic shopping and holiday visits with her family and relatives, as well as a few years she spent in the Assyrian church school - located on a road branching off from the main street, and in turn similarly destroyed today.

Nonetheless, the teenager is still able to conjure up some memories from those days, seeking the aid of her mother when she fails to remember a certain detail or name – with the destruction she sees all around her overshadowing anything she can recall.

What can we do with these memories?

At the end of Badawi Street, one of the busiest markets in the city which was not affected by the war, I stop in front of a large sign belonging to a sweets shop that is renowned for its famous Deiri dessert, Kleicha (a type of cookies with different fillings). In large font the sign reads: “Qarbon desserts. Formerly Cinema Fouad Street.” 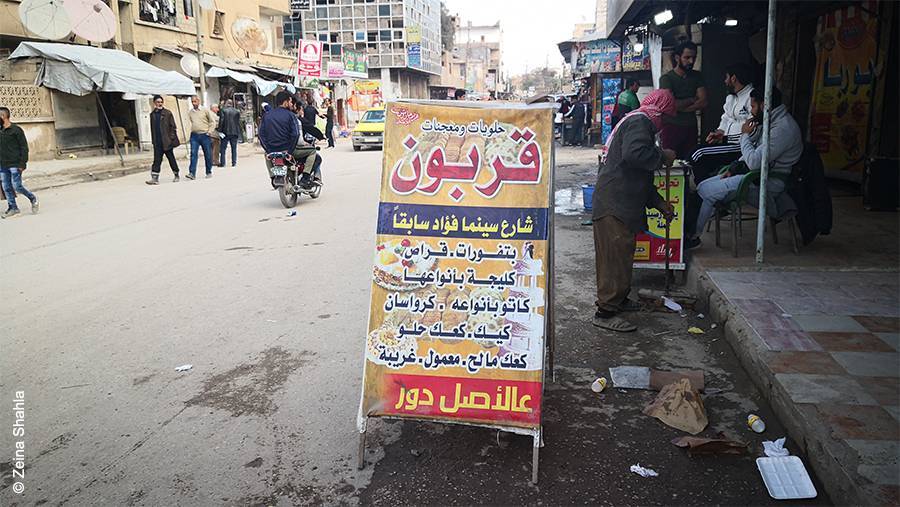 The owner of the store feels a sense of pride for belonging to that grand and ancient street, while customers for their part also feel a sense of reassurance reading the name of the street – even if it is accompanied with the prefix “formerly.”

Today, many of Deir Ezzor’s citizens attempt to continue to revive and commemorate the history, dates and details of their city – wishing that they had a time-machine that could take them back a few years.

Roua expresses her dream of owning such a time-machine, albeit for an additional purpose: to entrench and consolidate memories that may become more difficult to recall.

“So that you can know how beautiful Deir al-Zor used to be, and we could capture each of our memories to keep it more alive inside of us,” she says.

As for Hadiya, meanwhile, she decides to pass by her sister’s destroyed house in the middle of Cinema Fouad street, where dusty pieces of furniture, clothes and books can be found littered everywhere. She takes hold of a porcelain vase broken in two, saying that it was a gift she gave her sister on a teachers’ anniversary many years ago.

“Am I not supposed to cry over this? Am I supposed to stamp on what once was a part of our lives?” she asks. “Certainly not. Because I am no longer sad today, even the death and destruction mean nothing to me anymore. Every feeling that is inside of me has ended, without return.”

‘It’s not in my hands’: Syria’s food vendors and cafes are struggling to deal with the country’s gas crisis

Why did they try to kill Nowruz in Syria? How many homes did song and dance destroy?