If you enter Damascus from its eastern gate and walk a short distance, passing the Zaytoun alley along the way and walking on a short while longer, you’ll eventually run into a small park filled with young men singing and lovers trying to keep out of sight.

You’ll also find some Khityars – an old Turkish word for the “elderly” still used in the Damascus dialect. The park itself is still referred to as Qishla, another Turkish word referring to the former Ottoman “barracks” which was once located where the park now stand.

Now head left and enter one of Damascus’s famed narrow alleys, ancient homes adorning each side, so timeworn that you think that they surely must be on the verge of collapse. You’ve finally arrived at the heart of the Syrian capital’s Jewish Quarter.

A few years ago I decided to rent a small room there and convert it into an art studio where I could draw without distraction – but it didn’t quite work out like that. The room would inevitably transform into a living space, the site of meetings and late nights, where we discussed and resolved life’s problems. And it was a studio as well, of course.

My studio was effectively a store, its walls shared with those of an abandoned synagogue. I searched long for its name but couldn’t find it, though I did hear one informal designation for it: the “Um al-Banat” (literally “mother of the girls”) synagogue. Yet the person who informed me of the name was none other than my elderly Jewish neighbour Moshe, who is in his sixties.

Moshe… what a crude cliché for a Jewish name. The Palestinian residents of the quarter who were housed in the former residences of the Jews who fled the country (by the decision of consecutive Syrian governments) call him Musa.

But he had little resemblance to the stereotypical image perpetuated in Arabic movies and novels, that of a Jew with a crooked nose and arched back; instead, he was a plump, well-built man with a meticulously-dyed moustache. 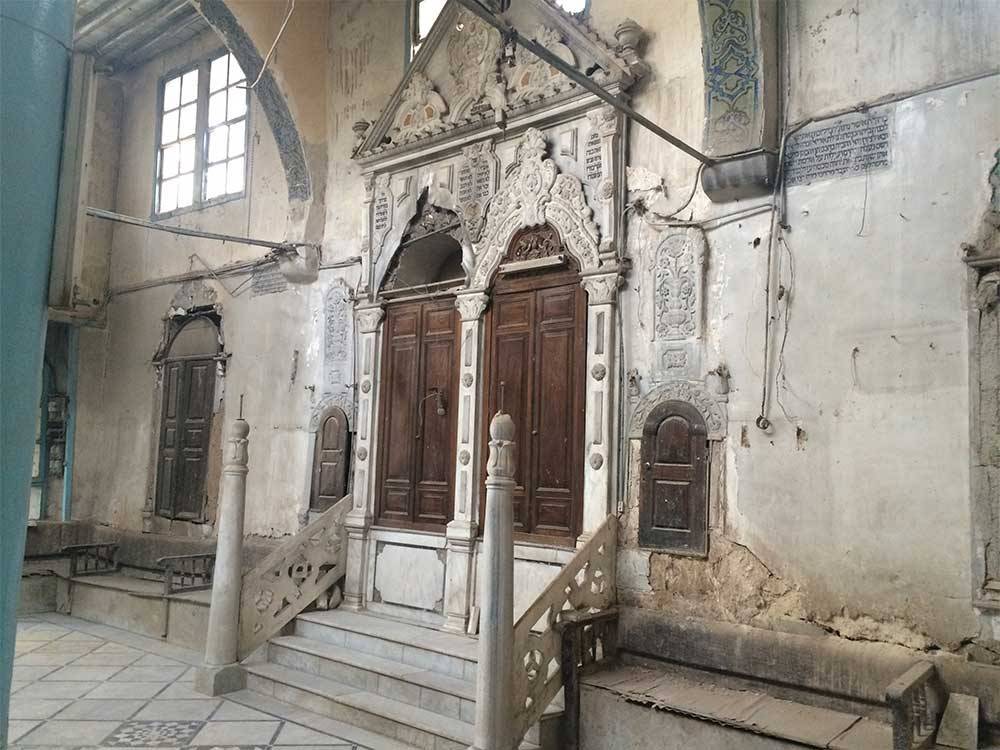 I used to like conversing with Moshe the Khawaja – “the foreigner” – whenever I ran into him, asking him about his solo life as a man living alone, about his house and his memories of this alley which was much-changed from that which he knew in his youth.

Every time, he would respond in his age-old, venerated Damascene accent: “This alley used to be a paradise, not in the crumbling state you see today… it used to be full of bitter orange and citron trees. You see that house over there, over there’s a citron tree more than a hundred years old. That’s my family’s home.”

Yet Moshe did not reside in his old family home, which is still standing three centuries after being built by his family’s patriarch. It resembles a palace, even if it is used today as a dumping ground. The old man had made a deal with the authorities at the time, to let him leave the house and move to live in his uncle’s abandoned home (which was newer than his family home) – as Jews were not allowed to refurbish and repair their homes and palaces.

About this uncle, Moshe tells me that he was a friend of Fakhri Bey al-Barudi, the renowned and controversial nationalist leader and Damascene politician. According to Moshe, al-Barudi himself used to spend late nights in that very house; he was known for his love of “late nights and cheer”, and used to listen to the songs of the Jewish actress Rahlo Chtah, extolling her beauty until the early hours of the morning.

The Khawaja’s memory was like my personal gold mine, and he knew this well. He liked to speak about himself, as he had been friendless for a long time, and he told me stories of his life whenever we had a chance to meet.

Moshe never got married. It had been decades since there were any women in the Jewish quarter, and none of his near-relatives remained either, leaving him alone.

“They’re all dead” Moshe said. “And those who aren’t dead, we don’t remember.”

I used to often ask Moshe why he didn’t travel and leave Syria with those other Jews who did. He always answered: “The road to America was long… and I don’t know how to speak English.”

I went with Moshe once to the Elfrange synagogue, the only one that still opens its doors to Jewish worshippers on the Sabbath. I considered the place both formidable and somewhat frightening at the same time, with three men and a women the only ones who remained to pray here, the youngest of whom was Moshe – the oldest, a skilled tailor in his nineties who still works in his shop in the Qishla with his old sewing machinery.

In the Elfrange synagogue, Moshe showed me with extreme eagerness the seforim, some old leather scrolls on which parts of the Torah and other holy texts were written, bound with gold and silver sheets. He sat me down on a timeworn wooden chair and picked a lemon from the synagogue’s old trees, telling me that the lemon was Yahweh’s gift, laughing.

The last time I saw Moshe, it was when I went to say goodbye to him before I travelled. He told me: “It’s good that you’re travelling… Don’t stay here like me!”

I understood what the Khawaja was saying without him speaking the words: the man didn’t want to travel, he only knew the Levant, Damascus, as his homeland. And while it was hardly the most sociable, intimate existence, he used to justify it by saying that he couldn’t travel as he didn’t know English.

Moshe used to love his Muslim, Christian and Palestinian neighbours, and they used to love him too. He used to love bitter oranges, citrons and lemons: he was an aged, vintage Damascene, one who didn’t dream of that which they called the “promised land” next door – for Syria was his true promised land, with his family home and its aged citron trees planted by his grandmother on his family’s land when his great uncle was born.

Today, I don’t know if the Khawaja is alive or dead, but in any case, I still hear his voice whenever I remember Damascus, and my small studio in the Jewish Quarter.

“Our modern history began with the sword:” how the Assyrians, Syria’s forgotten and ancient minority, survived the country’s civil war

Why did they try to kill Nowruz in Syria? How many homes did song and dance destroy?

The Harems of Egypt in the Eyes of an English Voyager