The most that Mariam (14) could hope for today is not to be forced to go back again to her husband's house, where her childhood was violated.

"I don't want to live with him, I want to study and live with my family," said Mariam. This was not a childhood dream but a destiny that Mariam and many other Lebanese girls who were forced to get married under the age of 18 were forced to face.

As for Fatma, who just turned 18, she managed to get a divorce from her husband after five years of abuse and suffering, during which she lost her fetus when her small body struggled to cope with the pain of labor.

While Salma decided to go her own way with her two children as she tries to provide them with the normal childhood that she herself was denied when she was led to her marital home at 13.

These are Lebanese girls who were pushed into motherhood at an early age. They are the victims of a community that on the surface boasts of being open minded, believing in women’s rights and progressiveness, when in fact they lie under the control of sects that dominate the personal status laws, and a parliament that is incapable of protecting young girls from violence and rape, without a legitimate or religious permission.

Mariam, Fatma and Salma are not just numbers in the idle statistics issued by Lebanese associations and international organizations on underage marriages in Lebanon. But they are mobile cases that encapsulate the suffering of 21.2% of Lebanese women who were led by their social and religious surroundings into getting married under the age of 18. 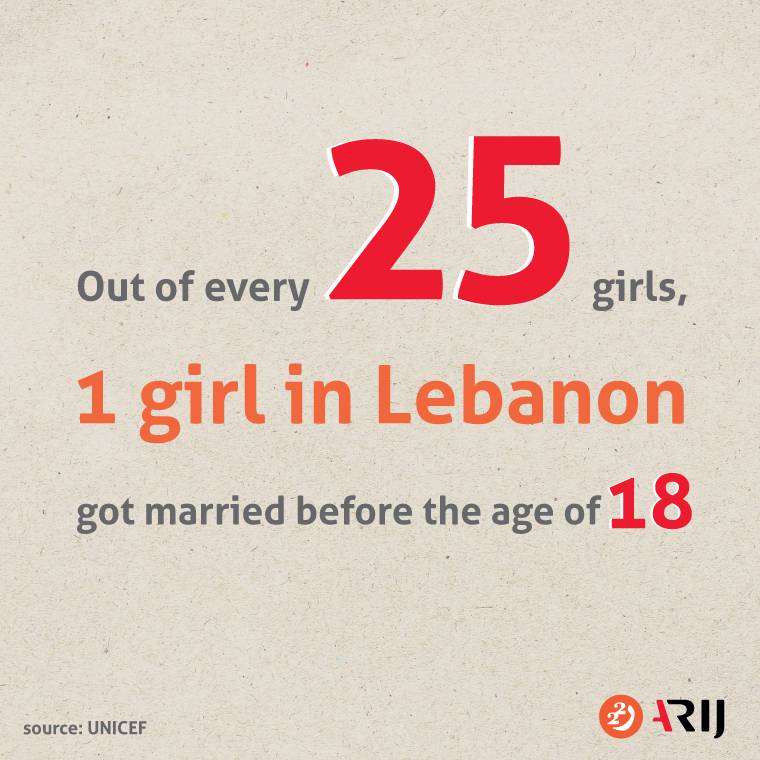 "Marriage of minors in Lebanon" is a title that encapsulates the suffering of girls in many countries around the world on the altar of customs and traditions, supported by religious interpretations.

This phenomenon is not strange to a country of 18 sects, whose influence extends beyond the personal status laws, to also control the House of Representatives and its 128 members and their legislative outputs.

These sects practice child marriage solely based on their religious beliefs. A member of the Supreme Islamic Shiia Council Sheikh Ali Bahsoun believes that "it is good for the girl to marry before she starts her menstrual cycle, that is to see blood, so as to share it with one person who is her husband, the only one sharing her secret," basing this belief on a Hadith by Imam Jafar Sadiq.

Each sect has set a minimum age of marriage, which is as young as nine for some. 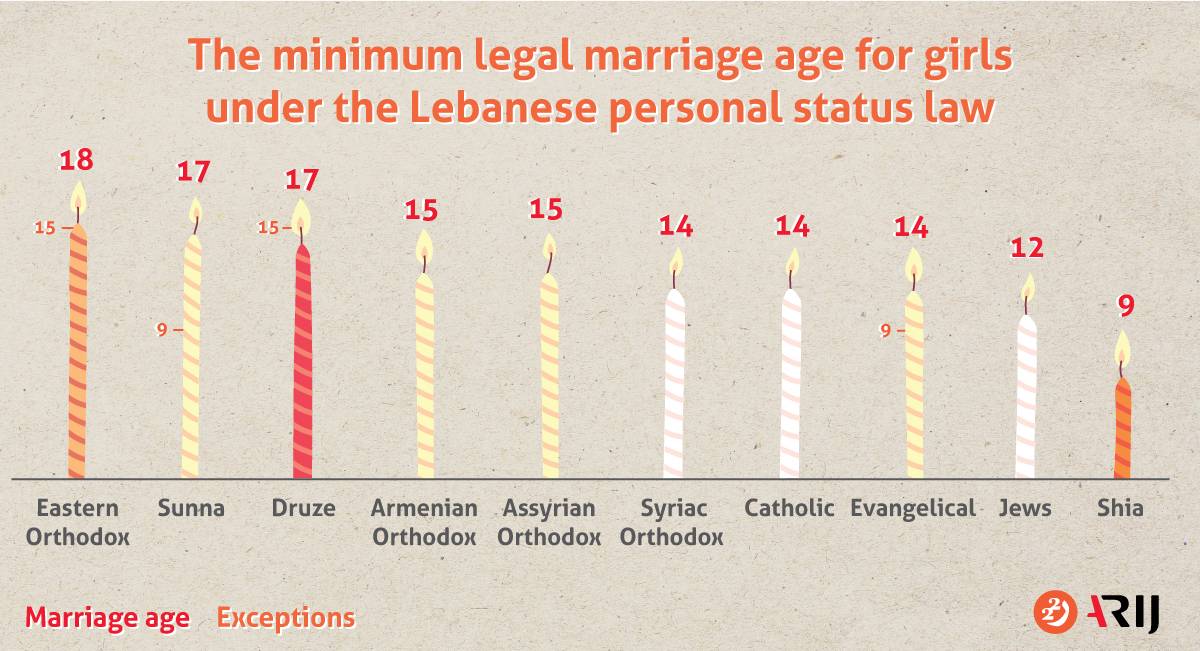 At a time when Lebanese associations are struggling to combat this phenomenon, both the Sunni and Shiite communities encourage the marriage of minors and refuse to lose the right to control personal status laws, contrary to the Christian sects that want it banned, although their laws may allow the bishop to permit a girl to marry below the age of 18.

The sects oppose any effort by civil societies and international organizations for a unified law prohibiting the marriage of minors and setting the minimum age of marriage at 18. They stress that violence against minors are exceptional cases and not common practice.

According to Sheikh Mohammed Assaf, head of the Supreme Sunni Shari'a Court, the violence "depends on the man, who could be complicated, and for a girl to be young should not be a reason for her to be reprimanded".

Sheikh Bahsoun agrees, stressing that "these cases are rarities in correlation with the number of Muslim families. Thus the legislation should not be blamed for that but Western media which targets Islam."

In 2014, The National Commission for Lebanese Woman submitted a draft law that aimed at "organizing early marriages" in Lebanon, through MP Ghassan Moukheiber (from the Change and Reform Bloc). This did not include a comprehensive ban, but required the consent of the juvenile judge as a prerequisite for the marriage of minors, not just their guardian.

However, other associations rejected this draft, considering it as a veiled legislation that allows the marriage of minors. The second project was prepared by the Lebanese Democratic Women's Gathering (RDFL) in 2017 and submitted to the parliament by MP Elie Keyrouz, from the Lebanese Forces bloc.

The bill sets the minimum age of marriage at 18 years for all Lebanese territories with no exception, with harsher penalties for violators. This, according to them, is the best and most suitable law to protect minors.

Today, associations oscillate between supporting one law and demanding the withdrawal of the first. And despite their disagreement on which law is most effective, MP Elie Keyrouz affirms that his law "contrary to articles 101 and 102 of the House of Representatives' rules of procedure, has not been referred to any specialized committee as should happen." While Moukheiber stresses that the MPs "prefer" his law to the one setting the age of marriage.

Sects that Obstruct and Propose their Own Solutions

Four MPs from Hezbollah and the Islamic Group have refused to speak to us or comment on the subject, giving the sects the right to speak on their behalf, turning their back on their roles as legislators. This was confirmed by lawyer Otaiba Mora’bi, adding that "The law will face major hurdles, and we do not expect it to be passed overnight, particularly that the religious sects consider themselves the guardians of the personal status laws, sidelining the representatives of the people," she said.

The sects don't see eye to eye on many issues, but agree on their rejection of a law that sets the age of marriage at 18.

Shaykh Bahsoun wonders: "Where is the justice in this? Which law is fair?". He adds: "This is what injustice is all about. I doubt that rational people would enforce such a law. We the Shiite Imams are absolutely against setting marriage age which denies human liberties and Prophet Mohammad’s Sharia. Who are they to determine what people should do?”

The Sunni community’s opinion is no different, with the head of the Sunni court stressing his sect’s fears of an increase in customary marriages (which are not registered in courts). "The enactment of a similar law is a violation of the interests of the Shari'a courts, and we reject it. If they want customary marriages to multiply, it is their business, but we want to preserve the society and not tear it apart."

For their part, Christian communities encourage the legislation of a law that would determine the age of marriage, because as Bishop Hanna Alwan, says: "The law is a greater guarantee of the family’s wellbeing. Our deputies are educated and should not be lenient when it comes to such a matter. Their children may be at risk of early marriage. They should wish for others what they don’t wish for themselves," he said.

Furthermore, what makes matters difficult is that Article 9 of the Lebanese Constitution protects the sects from any infringement on personal status laws. Meaning that the Council - and under constitutional protection - is unable to enact the Minimum Age of Marriage bill for 2017, which remains - according to the MPs who are pro this law - in the drawer of House Speaker Nabih Berri, waiting to be transferred to the committees and the Parliament’s General Assembly for discussion.

The Need for a Strategy to Protect Minors

The RDFL, ABAAD, and KAFA associations are working in cooperation with the Higher Council for Childhood, which is affiliated with the Ministry of Social Affairs, to combat the child marriage phenomenon by raising awareness and providing protection and psychological support, in addition to judicial advice. But these bodies complain of poor coordination and lack of accurate statistics for all Lebanese regions. 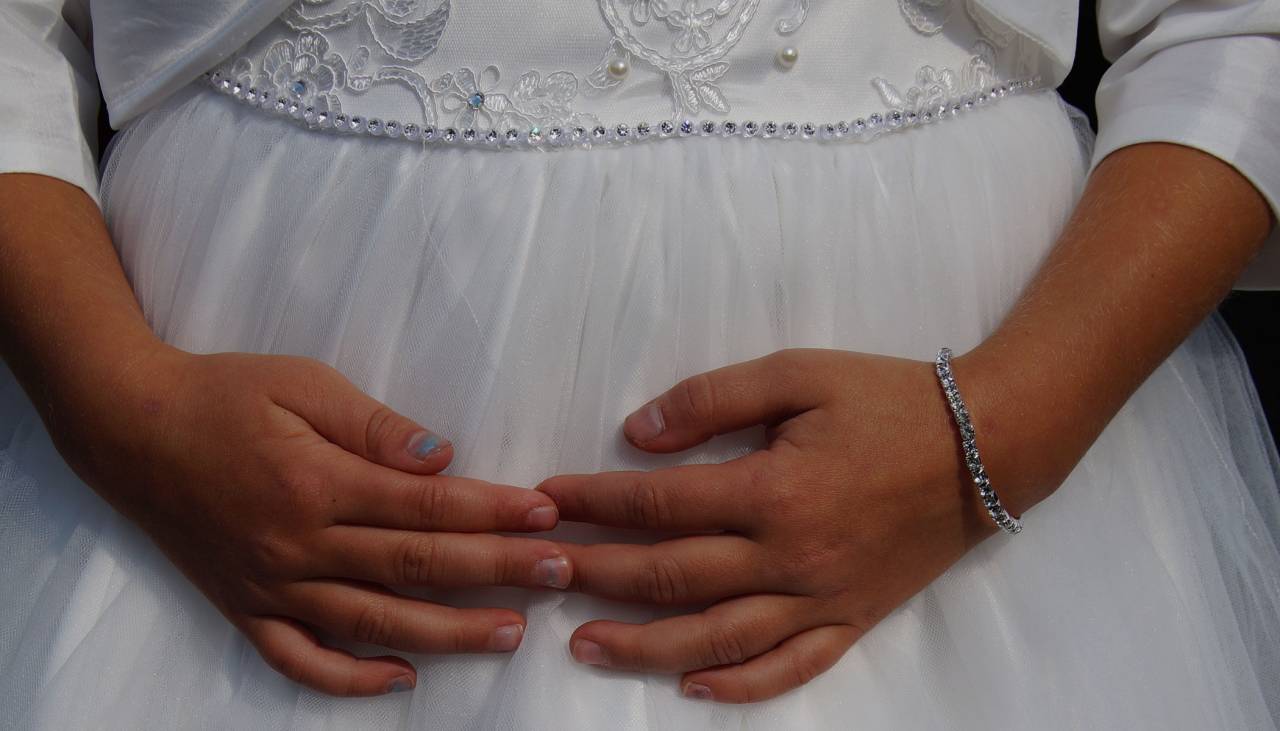 This is what we found when we contacted the Central Administration of Statistics, which assured us they did not have any figures for child marriages. UNICEF figures and two studies prepared by Saint Joseph University and the RDFL are the only available data today on the marriage of minors in Lebanon.

In the absence of official figures, and as the studies are limited to certain samples, how can associations accurately diagnose the crisis, or even intervene properly to reduce the marriage of minors or those at risk of getting married under 18?

Weak coordination between the concerned associations is scattering efforts.

Recently, the associations protecting the rights of children and women have formed a national alliance to intensify civic interventions and confining them within a single scheme that aims to protect children from early marriage. This is the same goal that is being pursued by the Ministry of Social Affairs, as was assured by the Secretary-General of the Higher Council for Childhood, Rita Karam, who referred to "the development of a national strategy in cooperation with UNICEF".

Pending the completion of funding and human resources that will be entrusted with the mission, there is still no clear indication of the imminent completion of this strategy.

The primary objective remains to set the minimum age of marriage at 18, not only to protect young girls who have been subjected to violence and marital rape, and denied their right to choose the right partner once reaching the legal age; the age at which they are allowed to lead, elect, sell, purchase and file a lawsuit.

The investigation documented the difficulty of enacting a law in Lebanon that protects girls from the nightmare of marriage under the age of 18. A law that conforms with international conventions in a country where the legislator awaits permission from religious authorities to discuss a project that would end the marriage of minors.

Mariam's dream of not returning to the marital home against her will, and Salma’s determination to go ahead with her life, are similar to Fatma's quest to overcome the enslavement of her childhood.

The latter painfully narrates chapters of her suffering: “I did not feel motherhood, I was deprived of everything, I want to continue with my life, to study and learn, and right now what I care about is that I no longer want to marry at all."

Although she is aware of the difficulty of what she hopes for, she continues: "I ask the Lebanese state to ban the marriage of girls before the age of 18".

After decades of volatility, hope remains of progress in this file. Particularly after the House of Representatives enacted the protection of women from domestic violence law, and the recent abolition of Article 522 of the Penal Code, which allows a man to avoid punishment for rape if he married his victim.

This investigation was completed with the support of Arab Reporters for Investigative Journalism (ARIJ) - www.arij.net - and coached by Mohammad Komani.